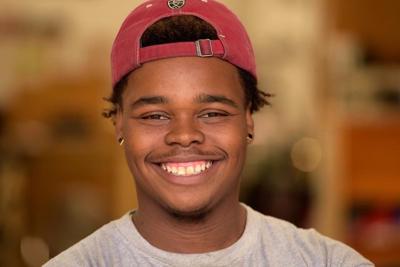 Aaron Jalil Allen was last seen on Sunday, June 23 in the Frogtown neighborhood of St. Paul.

His friends, family, and community members described him as positive, respectful, and always smiling. His sudden disappearance was not only a shock but counter to the reputation he had of being an effective community leader and communicator.

Aaron’s mother, Chauntyll Allen always knew there was something special about her son. She remembers him as a young child being spiritual on his own accord, taking a Bible with him everywhere he went. It was the same Bible he couldn’t let go of that became a tool of literacy for him in grade school. In his early elementary years Aaron Allen struggled with reading, but committed to reading his Bible for 20 minutes every day until his reading improved. Over the coming weeks his tenacity prevailed and he became a self-taught scholar of biblical history and advanced literacy.

This was Aaron Allen at his core; self-motivated, driven, respectful, and beyond his years. He advocated at the city and state level for safe pathways for cyclists and did such amazing work he had an opportunity to meet President Barack Obama.

In November of 2017 Aaron Allen began displaying changes in behavior from a bad reaction to a medication he was prescribed after a procedure on his tonsils. He was eventually hospitalized and diagnosed with psychosis, a symptom of a psychotic disorder in which “thoughts and emotions are so impaired that contact is lost with external reality.” It’s unclear if the medication prescribed led to the onset of his condition, or if it was pre-existing. Aaron Allen’s mother remembers her sons last months as resilient, not allowing the diagnosis to permanently stop him from working or tapping into his spirituality. Like many suffering with psychosis, Aaron Allen experienced highs and lows. He was robbed the day he went missing and was possibly emotionally triggered.

Thousands of community members took to the streets in search of Aaron Allen and his bright smile. One week after his disappearance his family made the devastating announcement of his passing to a watch group on Facebook called “Finding Aaron Allen.” Immediately plans for community vigils, fundraisers, and community bike rides in honor of Aaron Allen began being planned.

Chauntyll Allen, a community activist, was able to galvanize the energy of more than 2,000 friends, family, community and strangers in less than a week to help find her son. Though Aaron Allen’s life was cut short at 19 years old, his life and legacy of community empowerment will live on through his devoted mother, family and growing community.