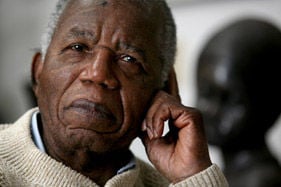 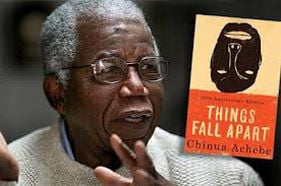 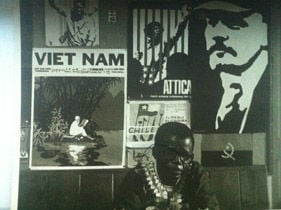 On March 22, 2013, Chinua Achebe, one of the world’s foremost African writers, joined his ancestors. He died at the age of 82. My mourning the loss of this literary giant is not just the right thing to do, it’s personal!

I had the distinct pleasure of being taught and mentored by this writer of novels, short stories, critical essays and poetry. Chinua used numerous forms to carry his message of the impact of colonialism on Africa: the novel, short stories, creative non-fiction, poetry and teaching.

The Africa of which he wrote was at the same time traditional and triumphant and corrupt and cruel. And Achebe himself, a Nigerian Igbo, lived a life that mirrored the same contradictions: he was a world-recognized author who was forced to live in exile from his own country because his country’s government deemed his writings politically

I first met Chinua in 1973 when I arrived in Amherst, Mass., to enroll in the Masters of Fine Arts Program. I was thrown into a circle of intellectual and literary greats– mostly men (for which I have long forgiven their intended and unintended misogynist tendencies) such as Jules Chametsky, founder of the Massachusetts Review and one of the foremost scholars on the image of Blacks in American literature and on Jewish literature in Americas. Jules and his poet wife, the late Ann Halley, who wrote of the Holocaust, became my Jewish Godparents. I lived with them for several months. Chinua and Christy Achebe were among the people to whom I was introduced. Others included members of the Afro-American Studies Department such as Dr. Johnnetta Betsch Cole who was chair; Michael Thelwell, a Jamaican and former SNCC activist who would write the novel, The Harder they Come (1980) based on the brilliant 1972 movie starring reggae musician Jimmy Cliff; and Esther Terry and her late husband Eugene Terry, who were among the founders of the W. E. B. Du Bois Department of Afro-American Studies. Esther Terry is currently interim president of her alma mater, Bennett College for Women.

The arts were as integral a part of Afro-American Studies as history and literature. Musicians and artists like the late Matt Roach and his then wife, Janus Adams, Archie Shepp, Paul Carter Harrison, Nelson Stevens, one of the founding members of Afro-Cobra, filled out the ranks of talented scholars that were the foundation of the department. Among this crowd, I would meet my ex-husband, Ernest Allen, Jr., who joined the department as a historian in 1973. And down the street, Sonia Sanchez resided for several years on the faculty of Amherst College. I was able to take creative classes from her, but that is another story.

In Chinua Achebe’s African Literature course at UMass, I was exposed to the brilliance of African writers– mostly men at that time– and Chinua’s own penetrating post-colonial critiques. He did point me in the direction of African women writers, upon my request and encouraged my development of my own poetic voice. Always with a calm demeanor, Chinua took on the hard questions about Africans’ own complicity in making a mess of the continent’s affairs, which he acknowledged. But, he never ever backed off his critiques of colonialism and post-colonialism. He was an ardent critic of Joseph Conrad’s Heart of Darkness and the way in which it depicted Africa as a “dark” place with people who grunted rather than spoke. His indignation over what he deemed a racist portrayal would later inspire him to work on an Igbo language project with his son.

I cut my magazine editorial teeth on Okike: A Nigerian Journal of New Writing, the African literary journal founded by Chinua Achebe in 1974 (or 1975) at the University of Massachusetts at Amherst. I became his teaching assistant with responsibilities for working with contributing editors like Joseph Skerrett (English Department) and Lynn Innis. From them and Chinua, I learned the editorial functions of manuscript solicitations, the peer review process, layout and graphic design, which I got to do hands on, working with the printers, subscription management, etc.– it doesn’t get any better than that. It was a magazine apprenticeship in the old tradition of learning by doing. My mettle was truly tested when Chinua took a year’s leave and entrusted the daily editorial and design functions to me and the secretary. This predates the era of cell phones, emails, and digital technology, so we were on our own. I learned how to layout pages, design ads, and read blue-line galley proofs.

Throughout my life, these skills in one way or another would serve me well, but especially when, for seven years (1997-2004), I became the editor of Transforming Anthropology, the signature journal of the Association of Black Anthropologists. Throughout the time I worked under the tutelage of Chinua Achebe, he was always gracious and optimistic. Even as he delved into Africa’s past to explain and understand its messy present, Chinua did so with a positive spirit and laughter in his eyes. He had an eye-twinkling sense of humor.

I left Amherst, Mass., in 1991 and it would be sixteen years before I would encounter Chinua Achebe again. In 2005, I took a leave of absence from my position as Associate Professor of Anthropology at the University of Florida to work as Program Officer for Education and Scholarship at the Ford Foundation. My portfolio of $10M and 59 grantees, focused on developing and sustaining the fields of Black Studies and Women’s Studies and supported scholarship and research on race, class, gender, ethnicity, faculty diversity, cultural diversity and “difficult dialogues.” One day, in my pile of grant inquiries a request to fund an African language project from Bard, in the Annandale on the Hudson caught my attention. In the back of my mind, I vaguely recalled that Bard had offered Chinua Achebe a professorship and a house to accommodate his new disability. Curious, I decided to go to the source rather than have them visit me as they had requested. I asked if they could arrange for Prof. Achebe to meet with the Program Officer from the Ford Foundation– me.

I wanted to surprise Chinua and Christy. And it was a glorious reunion. I was welcomed with hugs and memories of the times we had spent in the Pioneer Valley. We spoke of our children; their sons were all grown up. The youngest, Chidi, was “the youngest ever to be appointed a medical director in the US,” according to the Vanguard. And Dr. Ike Achebe, was now a scholar in his own right. In Chinua, I found a man of wisdom, at peace with the hand he had been dealt of paralysis and wheel chair bound, yet still filled with aspirations and vision. He had the same critical focus, twinkling humor, and a passion, possibly fueled by the breakdown of his body, to complete his life-long project on a dictionary of the Igbo language. The Igbo Dictionary Project is a labor of love that Chinua shared with his son Ike, who managed the project. With my support, Bard received a FF grant to support both the Igbo Dictionary project and establish the Chinua Achebe Center for African Writers and Artists, following my recommendation that Bard institutionalize Chinua’s vision and honor his legacy through some type of institution. Chinua would remain at Bard until 2009 under the title of the Charles P. Stevenson Jr. Professor Emeritus of Languages and Literature. Upon retirement, he departed for Brown University where he remained until his death last month.

Those who have yet to read Chinua Achebe’s works in their entirety have no idea of what they are missing. He is a storyteller of the highest order; I highly recommend starting with Things Fall Apart. The novel has sold over 8 million copies and is translated into over 50 languages. It is a global masterpiece. The Daily Freeman quotes noted African scholar Kwame Anthony Appiah as once saying in reference to the impact of Chinua Achebe on African literature: “It would be like asking how Shakespeare influenced English writers or Pushkin influenced Russians. Achebe didn’t only play the game, he invented it.”

On the passing of this literary great, I can only say rest well gentle giant and goodbye my friend.

Irma McClaurin, PhD is the Culture and Education Editor for Insight News of Minneapolis. A bio-cultural anthropologist, consultant, and writer, she lives in Raleigh, NC (www.irmamcclaurin.com) (@mcclaurintweets). Most recently, she provided technical assistance to the Friends of Oberlin Cemetery to acquire Landmark status for an historic African American Cemetery in Raleigh, NC.