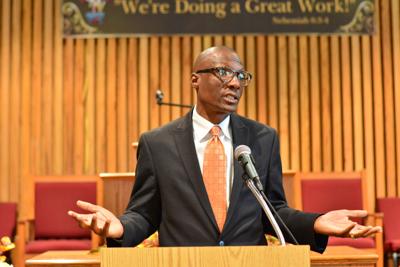 Remone Wagner is changing his life for the better.

Describing himself as once “lost,” Wagner is changing his life path. But he said he could not have done it with the assistance from Emerge, a community nonprofit serving the residents of North Minneapolis.

“Without Emerge I’d probably be sitting in a cell somewhere,” said Wagner.

“I was lost before Emerge. I needed a job and they helped me get one. I didn’t want to make money the wrong way (alluding to dealing in narcotics).”

And while Wagner is making money the “right way,” others may not be as fortunate. That is because a large portion of Emerge’s funding has been halted. Same for the Minneapolis Urban League, Sabathani Community Center, Stairstep Foundation and Minneapolis Public Schools – all a part of the Unity Opportunity Collaborative (UOC).

In 2016 $4.2 million was appropriated to the UOC by the Minnesota State Legislature to address income and employment disparities among Blacks and whites in Minnesota. The money was not given directly to the UOC, but disbursed through the Minnesota Department of Employment and Economic Opportunity (DEED). Since Sept. 1 of last year those disbursements have been suspended do to what DEED is calling malfeasance and mismanagement.

The member organizations of the UOC say they have done nothing wrong and contend that with each passing day citizens are not receiving the resources owed in accordance with the Legislature’s intent.

“We have had to let go 27 people because of this,” said Mike Wynne, president and CEO of Emerge. “In my 30 years of community work I’ve never seen anything like this.”

Wynne said while all UOC accounting was above board, he could understand if DEED had questions, but any and all questions asked of the collaborative have been addressed.

“DEED brought up 28 issues and we felt we answered all DEED’s questions with six issues requiring advisement from DEED,” said Wynne. “The findings (by auditor Mark Felton) were minor in nature. We’re talking about minor administrative issues, but again and again, the state agency is being intractable. This has put our reputations in question. Our (accounting) books are open. We have nothing to hide.”

According to members of the UOC, issues in question were as minuet as printer and toner usage at Sabathani.

“And then they (DEED) tell us we (Sabathani) can’t serve Laotian people,” said Bill English, vice chair of the Sabathani Board. “How can you as a state agency say that? That’s discrimination.”

With funds in limbo, UOC took DEED to court this past February, earning a March verdict of $568,000 for reimbursement of funds but DEED appealed the ruling and both sides entered into mediation. On May 23 DEED requested a 49 percent reimbursement of already incurred expenses.

Sen. Bobby Joe Champion, who was one of the architects of the legislation that called for funding of programs to serve disadvantaged communities, said DEED is not acting in good faith.

“Accountability is always important, and these organizations have been clear they want to be held accountable; that’s not the issue. All should be held accountable, including our state agencies.” said Champion. “But when you hear that issues revolve around toner people say, ‘No, it has to be more than that.’ They can’t believe these are the issues coming up. And the overall impact is the community is not being served.”

Insight News reached out to DEED for comment and received an email statement reading, “The Minnesota Department of Employment and Economic Development (DEED) is committed to building a successful economy for individuals, businesses, and communities by working to improve opportunities for growth throughout the state. DEED takes very seriously its responsibility to ensure outcomes and accountability of public dollars on behalf of Minnesota taxpayers. DEED has an obligation to ensure that grantee organizations are in full compliance with state laws and grants management policy. Due to the ongoing litigation on this matter DEED will not provide further comments.”