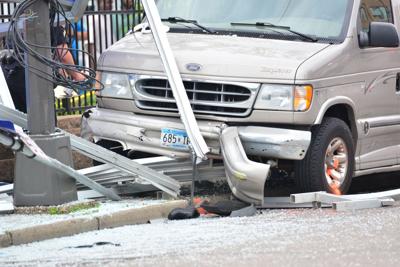 A van plowed into a crowded bus shelter at the corner of West Broadway and Lyndale Avenues in North Minneapolis causing several injuries, at least three critical, and the community is calling for the driver’s arrest.

Six people were injured; three of them in critical condition, when George Reeves Jensen, 83, crashed into them as they were gathered under a Metro Transit bus shelter. The incident happened July 9 just before 9:30 a.m. According to Howie Padilla, public relations manager for Metro Transit – the jurisdiction handling the investigation – Jensen was traveling on Lyndale at the same time as a transit bus was loading and unloading passengers when the van struck the mirror of the bus. Padilla said the van backed up and again struck the bus mirror before driving forward, turning onto West Broadway and running into the individuals at the shelter.

Many witnesses offer a different account. Several on the scene have indicated Jensen was cruising the area for prostitution when he was the victim of a robbery. Witnesses say Jensen was angered by the theft and intentionally ran over the pedestrians. An added layer to the incident, Jensen is white, and all his victims are Black.

Jensen was later questioned by Metro Transit police and was only issued a misdemeanor citation for careless driving and released following questioning. Padilla said though the investigation is ongoing, the act did not seem intentional.

“We in the community believe it was intentional and we’re calling for the investigation to be turned over because Metro Transit isn’t up to the job,” said Nekima Levy-Armstrong.

Armstrong point out what she said were gross errors in the investigation, including the fact Jensen was not given a field sobriety test at the scene.

“This is being covered up and Jensen is getting away with (a crime),” said Levy-Armstrong, who said Jensen should be facing attempted murder and assault charges.

Two days after the shelter was destroyed a new one was erected, something Levy-Armstrong and others advocated for, but the remnants of the horrific incident remained with broken glass scattered about and a metal pole dented and scarred.

The intersection of West Broadway and Lyndale is heavily populated as a known gathering spot and several people witnessed the horrific incident; many whom have talked to investigators. Padilla said the transit bus was outfitted with a front-facing camera and investigators believe there are several street cameras that also captured the incident.