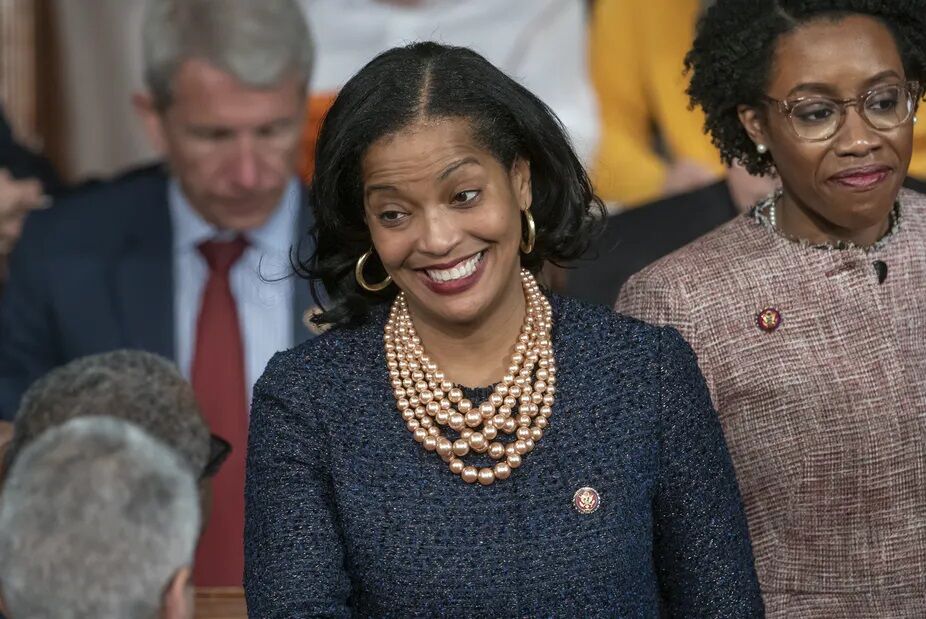 Jahana Hayes (left) and Lauren Underwood were reelected to the House of Representatives. 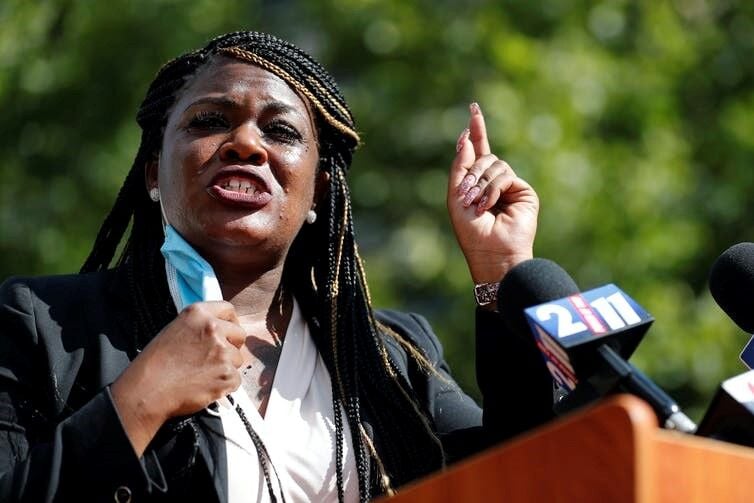 Activist Cori Bush will represent Missouri in the 117th Congress. 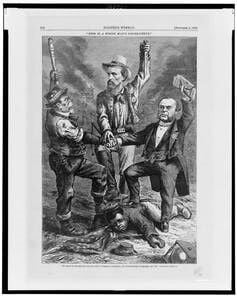 The caption of this 1868 cartoon read, ‘This is a white man’s government. We regard the Reconstruction Acts (so called) of Congress as usurpations, and unconstitutional, revolutionary, and void - Democratic Platform.’

Women will gain at least 14 seats in the 117th Congress, setting a new record for female representation.

Women will be at least 27% of the House and 24% of the Senate. The Senate numbers do not include Vice President-elect Kamala Harris, or Kelly Loeffler, a Georgia Republican involved in a runoff that will take place after Congress is sworn in. Women make up 50.52% of the U.S. population.

A strong showing by Republican women helped drive this trend, with at least 36 serving in the next Congress, compared to 22 currently.

Throughout my 20-plus year career as a political science professor, I’ve studied women’s representation in mayoral, congressional, gubernatorial and presidential elections.

Here’s my look at the female demographics of Congress following the 2020 elections.

In it to win it

It is often said that “When women run, women win,” and 2020 also saw record numbers of women running in congressional elections.

In total, 643 women were candidates in congressional primary elections, including a record number of Asian or Pacific Islander, Latina, Middle Eastern or North African and Native American women.

Black women also set a new record in 2020 with 117 entering primaries for the House and 13 for the U.S. Senate, according to the Center for American Women and Politics.

Many of the women first elected to Congress in 2018 retained their seats.

All four members of “the Squad” were reelected. These women – Ayanna Pressley, Ilhan Omar, Alexandria Ocasio-Cortez and Rashida Tlaib – are Democratic women of color known for their progressive policies, including the Green New Deal.

Also re-elected were women first elected in 2018 like Illinois Democrat Lauren Underwood, winner in a predominantly white Republican district; Jahana Hayes, the first Black woman to represent Connecticut; and Georgia’s Lucy McBath, Democratic winner in a district that had been held by Republicans for almost four decades.

These re-elections prove that their victories in 2018’s “pink wave” weren’t a fluke and that they have real staying power in Congress.

In some 2020 congressional races, African American women ran against each other – a sign of their strong participation. For example, Florida’s Val Demings, Florida’s Frederica Wilson and Georgia’s Nikema Williams – who will succeed the late civil rights icon John Lewis – won their congressional races after defeating other Black women.

The freshman class in the House of Representatives will include at least 26 women serving their first term.

Cori Bush, a Black Lives Matter activist, became Missouri’s first Black congresswoman. She represents a district that includes the cities of St. Louis and Ferguson, the site of the police killing of African American teenager Michael Brown in 2014. Ferguson also elected its first Black and first female mayor this year.

Other women of color joining the House for the first time include former Telemundo journalist Maria Elvira Salazar, a Republican who unseated Donna Shalala in Florida, and attorney Teresa Leger Fernandez, a Democrat from New Mexico.

Marilyn Strickland, the former mayor of Tacoma, Washington, will be the first Korean American woman elected to Congress and the first Black representative from Washington State.

Some underdogs didn’t make it

Arkansas’ Joyce Elliott, a former teacher and veteran state legislator, came up short in her bid to become the first African American congressional member from Arkansas.

Florida’s Pam Keith, a military veteran and attorney, lost by a wide margin to her Republican opponent.

Patricia Timmons-Goodson, the first African American member of the North Carolina Supreme Court whose federal judicial nomination by Barack Obama was blocked by Republicans, failed to win a seat in Congress.

Also coming up short was Tennessee’s Marquita Bradshaw, a single mother and environmental activist who would have been Tennessee’s first Black female congressional member if she had won.

California’s Tamika Hamilton, Georgia’s Vivian Childs, Maryland’s Kimberly Klacik and Ohio’s Lavern Gore are all Republicans who ran in mostly urban Democratic districts, but none won on election night. All Black female congresswomen – with the exception of Utah’s Mia Love, who served two terms in the House – have been Democrats, suggesting that the path to victory is especially steep for Black Republican women.

Candace Valenzuela would have become the first Afro Latina in Congress, but lost her race for Texas’ 24th congressional district to Republican Beth Van Duyne, a former Trump administration official.

Although they lost, their candidacies hint that more women of color will continue to run for Congress as both Democrats and Republicans and may just win next time.

For most of its history, the members of both Houses of Congress have been white men.

The monotony began to break in 1916 when Montana’s Jeannette Rankin won election as the first female congresswoman. In 1964, Hawaii’s Patsy Mink became the first Asian American elected to congress. The first Latina, Ileana Ros-Lehtinen of Florida, was elected in 1989.

Chisholm called Black women “catalysts for change” in politics. Rep Maxine Waters, a Democrat from California, once tweeted, “I cannot be intimidated and I’m not going anywhere.”

[Deep knowledge, daily. Sign up for The Conversation’s newsletter.]

Professor Kimberlé Crenshaw’s theory of intersectionality suggests Black women are discriminated against because of the “intersection” of their racial, gender and class identities. One result is that they encounter disadvantages when running for office.

Some of the women I’ve mentioned faced disadvantages related to their race, gender or class when running against well-funded incumbents. Yet, my work in the field of women and politics also suggests that the long tradition of Black female political leadership in America is gaining momentum. Despite some women’s losses, their representation has, and will continue to, increase in Congress.

This article originally appeared on The Conversation is republished under a Creative Commons license.