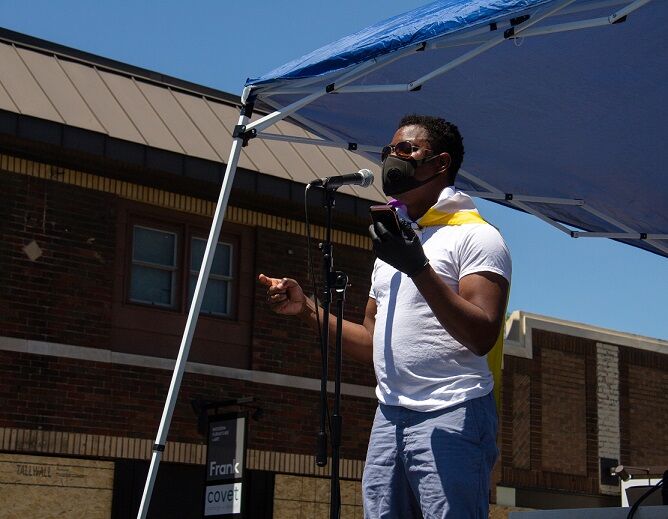 Alex Palacios, a candidate for the Minneapolis City Council Ward 6 seat, speaks with the nonbinary pride flag wrapped around their neck on Friday, June 5, 2020. 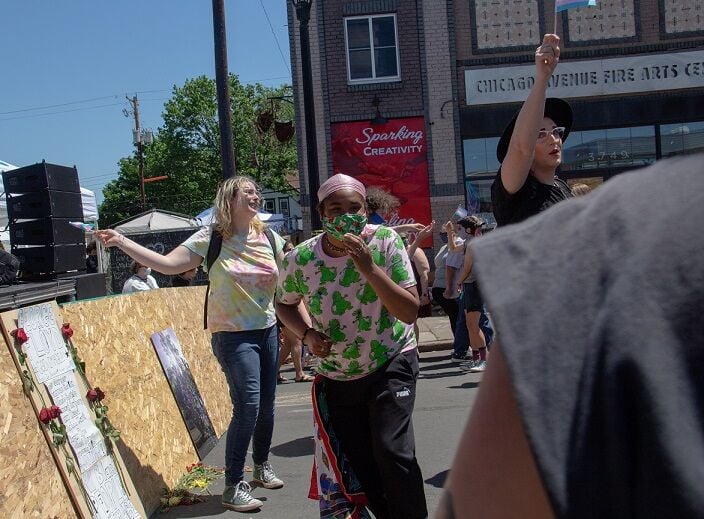 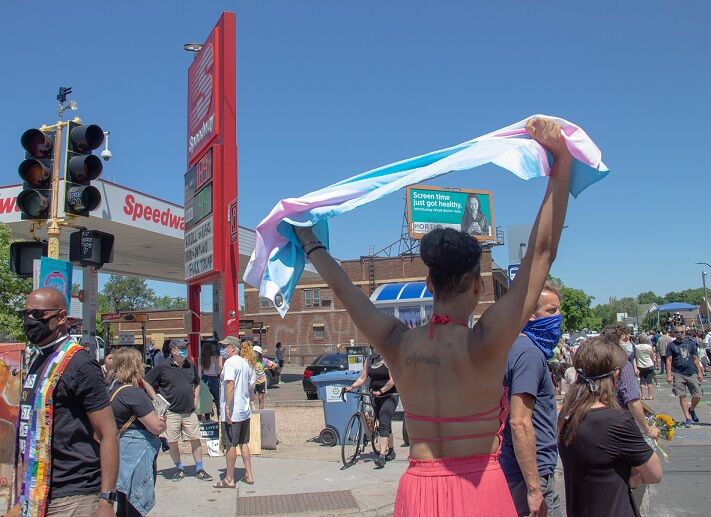 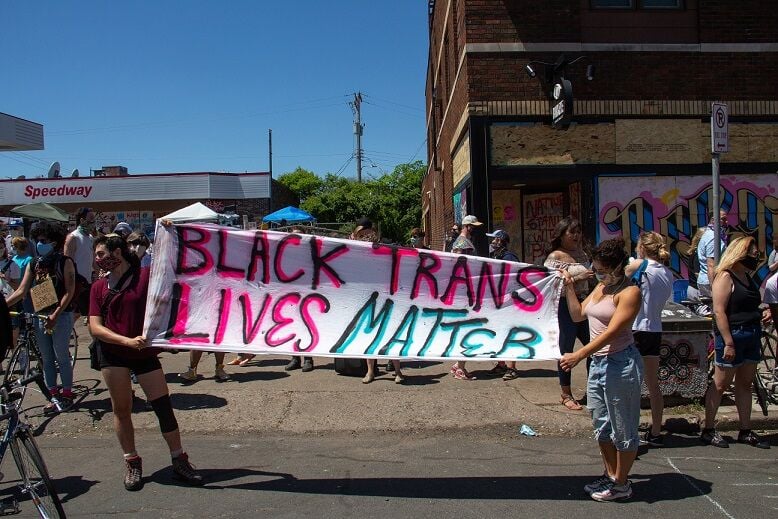 Demonstrators moved near the front of the stage near Cup Foods to show support for the speakers on Friday, June 5, 2020. 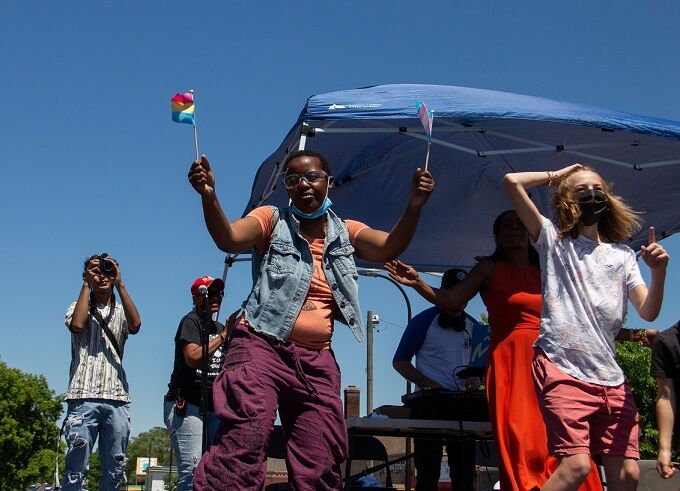 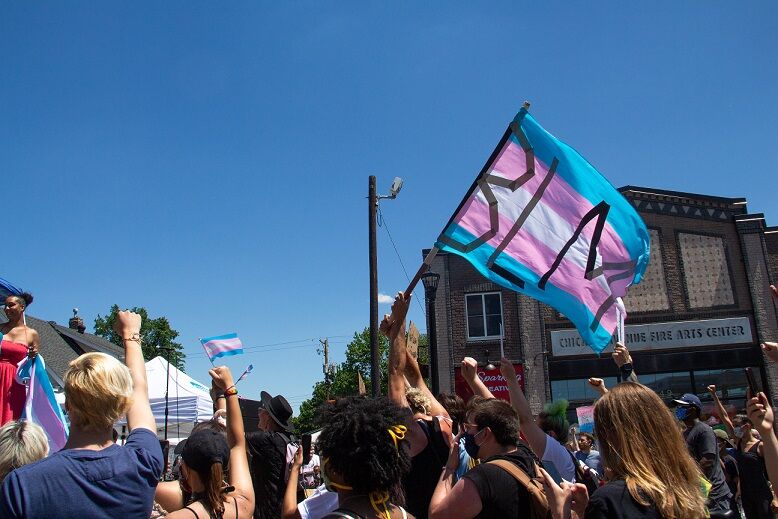 Demonstrators in support of transgender Black lives cheer as speakers take the stage on Friday, June 5, 2020. 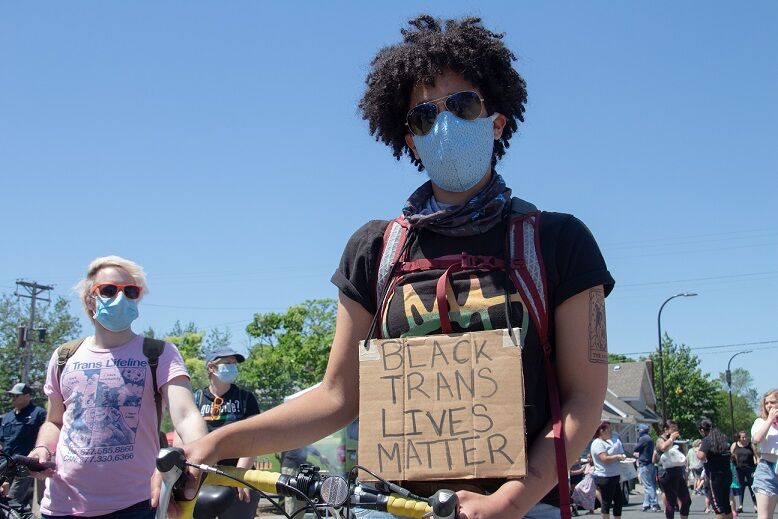 Stephanie, who declined to give a last name, poses with bike and sign in support of Black trans lives on Friday, June 5, 2020.

Alex Palacios, a candidate for the Minneapolis City Council Ward 6 seat, speaks with the nonbinary pride flag wrapped around their neck on Friday, June 5, 2020.

Demonstrators moved near the front of the stage near Cup Foods to show support for the speakers on Friday, June 5, 2020.

Demonstrators in support of transgender Black lives cheer as speakers take the stage on Friday, June 5, 2020.

Stephanie, who declined to give a last name, poses with bike and sign in support of Black trans lives on Friday, June 5, 2020.

The intersection of E. 38th Street and S. Chicago Avenue, where George Floyd was killed by a Minneapolis police officer, was filled with chalk art, flowers, and calls of “Black Lives Matter” Friday. It was at that intersection that a group of LGBTQ activists and community members hoped to affirm that “All Black Lives Matter.”

Waving flags of pastel pink, white and blue, demonstrators turned out to march for the lives of Black transgender people who have been killed by police or other civilians. But due to concerns about the heat and the spread of COVID-19, organizers scrapped the march and gathered at the intersection instead.

Alex Palacios, a candidate for the Minneapolis Ward 6 seat who organized the event, said they were motivated to do something after hearing about Iyanna Dior, a Black transgender woman from Minneapolis. Video footage of Dior being attacked by several people at a grocery store surfaced on social media earlier in the week.

“I thought, there are marches happening all across the nation protesting the treatment of Black lives. Why, in this moment, are trans Black lives being minimized?” said Palacios, who identifies as Afro-Latinx, transgender and nonbinary.

During a Facebook Live with transgender activist Dee Dee Watters, Dior recounted fearing for her life after she accidentally hit some’s vehicles with her cousin’s car while trying to park in St. Paul. She fled to a nearby store, Sam’s Dairy, while people followed behind, she said.

“All I knew is everybody’s coming behind the counter and grabbing me and I blacked out from there,” Dior said. “The only thing that’s running through my mind is, am I going to be safe, am I gonna make it out of here, please don’t let me leave this store …”

In a last minute change of plans, LGBTQ activists from the community took to a stage set up near Cup Foods and asked for 36 seconds of silence; one second for each Black and brown transgender person that has been killed since 2019, though they noted that the number is likely much higher. According to the Human Rights Campaign, at least 38 transgender people have been killed since 2019.

Baki Z Porter, who identifies as Black, Native American and Two Spirit, made an emotional plea for intersectionality, acceptance and action from the Black Lives Matter movement.

“I'm tired. And I'm sad. And I don't want to be here at all, because I'm Black, I'm trans, I'm queer, I'm autistic, and nobody really likes me because I'm a bullshitter, excuse my language, so I'm gonna call BS. Okay?” Porter said. “I'm telling you I’m tired because we're not organized, and we're not intersectional. Being out here, trying to protest with everybody and honor Black life has put me and mine at risk.”

Porter referenced Tony McDade, a Black transgender man who was shot and killed by police in Florida on May 27.

“I know a lot of Black people, a lot of Black cis, straight people, you goin’ see us and say, ‘Dang, we already be trying to get our liberation. We ain't got time to care about other issues.’ But I'm telling you, white supremacy is the root of all evil.”

Rehema Mertinez, who identifies as a Black transgender woman, said she was speaking at the intersection that day for George Floyd and Iyanna Dior.

Palacios said the march had originally been scheduled for Thursday, the day of George Floyd’s memorial, but was postponed after some community members pushed back against having the events overlap.

“Black trans and nonbinary people have been told forever, like, it's not your time, sit down,” said Iola Kostrzewski, Palacios’ campaign communications manager, referring to the blowback. “And then the irony of all this happening during Pride Month, and Pride was started by Black and brown trans women.”

Palacios said they believed intersectionality underpinned the movement, and hoped people would come to realize that the “umbrella” of transgender identies is extensive.