Founded in 2015, the nonprofit Unicorn Riot has used video and social media to livestream coverage for several hours at a time on a nearly daily basis since George Floyd’s death on May 25, 2020. Unicorn Riot can verify and document evidence easily, such as the police role in instigating violence, because its videographers are at events as they unfold. 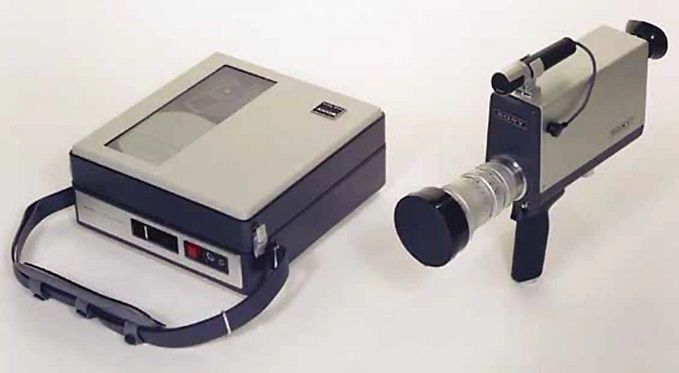 A late 1960s Sony Portapak made it easier to produce grassroots videos.

On-the-ground views of the protests sweeping the country are vital for understanding who is protesting and why. Mainstream news media coverage and individuals’ social media posts only go so far – and can focus on violence and disruption.

There’s a grassroots media tradition in the U.S., too, which I’ve studied in my work on media and social movements. The livestreamed, unfiltered video coverage provided by the small staff of the nonprofit media collective Unicorn Riot is the modern heir to a history of on-the-street grassroots video documentary filming of protests and social movements that started in the late 1960s, including unstructured interviews with protesters.

Those groups wanted to include diverse voices, stories and perspectives that mainstream media typically don’t cover. But they likely didn’t imagine that their successors, like Unicorn Riot, would have the tools to instantly broadcast their videos to the general public to help shape how they learn about social issues.

Long before mobile phones and YouTube turned amateurs into video producers, documentary video production was expensive and time-consuming and required lots of heavy equipment. In 1967, Sony introduced the Portapak. The Portapak was a video camera with the first battery-operated, portable videotape recorder.

The Portapak made it easier for community members to produce videos. It was lightweight, easy to use and relatively inexpensive.

People could initially record up to 20 minutes on a half-inch reel-to-reel videotape. They could interview community members or document events on the street and play back recordings instantly on other Sony videotape recorders.

Grassroots video, by stressing the participation of community members in making their own electronic information, was less concerned with ‘polished’ products than with animating the ‘process’ of social change,” writes historian Deirdre Boyle in the book “Subject to Change: Guerrilla Television Revisited.”

The Videofreex and other underground media collectives quickly emerged across the U.S. New York became a hub for the underground video scene. The scene mainly attracted left-wing activists, filmmakers and artists who were interested in using media as a tool for social change.

These collectives made videos about their involvement in the counterculture movement. They documented antiwar demonstrations, campus rallies and the hippie lifestyle. They exhibited their recordings at underground theaters, art galleries and university campuses in TV-equipped vans.

At the time, CBS, NBC and ABC dominated mainstream TV. Their media coverage generally consisted of highly structured interviews and documented prearranged events, such as conventions and inaugurations. The networks weren’t showing stories from the perspectives of the youth who were at the center of the vibrant counterculture movement.

In 1969, CBS turned to the underground video scene. The network wanted to counter mainstream media’s conventional focus and detached storytelling approach. CBS also wanted to be relevant to a younger, liberal audience.

CBS hired the Videofreex and spent thousands of dollars on the TV pilot for “Subject to Change,” a weekly magazine-style series. A CBS employee had met the Videofreex with their video cameras in hand at the Woodstock music festival earlier that year. “Subject to Change” was supposed to replace “The Smothers Brothers Comedy Hour,” a series popular with youth.

The Videofreex traveled around the country as part of “Subject to Change” to show Americans an insider’s view of youth counterculture. CBS sent the Videofreex to Chicago in October 1969 to interview youth activist Abbie Hoffman. Hoffman was one of the “Chicago 7” who was accused of conspiring to riot at the 1968 Democratic National Convention.

The Videofreex also recorded an interview with Fred Hampton, the deputy chairperson of the Illinois chapter of the Black Panther Party, on Oct. 19, 1969. They interviewed Hampton six weeks before the police killed him in a raid that left another Black Panther member dead, too.

CBS taped the 90-minute “Subject to Change” TV pilot with a live studio audience and network executives on Dec. 17, 1969. The pilot consisted of clips from Videofreex tapes that were interspersed with live rock music performed for the studio audience.

In the end, however, network executives didn’t release the program to the general public because they thought it was too radical and ahead of its time. As a result, the Videofreex and CBS parted ways.

In 1972, the Videofreex started Lanesville TV, the first TV station in the country to operate without a license from the Federal Communications Commission.

Based just north of New York City, the station broadcast local community reports, live studio interviews, sketch comedy and experimental video art. The Videofreex ran Lanesville TV until the collective disbanded in 1978. The station was the model for the Low Power Television system, which the FCC established in 1982 to provide an inexpensive and flexible way to produce local TV programming in small communities.

The Videofreex influenced similar video collectives and producers across the country. One producer was Dee Dee Halleck, who co-founded Paper Tiger Television in 1981 to analyze and critique the communications industry, presenting marginalized voices and views that were largely absent in mainstream media. The show became the first nationally distributed public access television program.

Later, the Independent Media Center (Indymedia) became a pioneer in online grassroots media. Established in 1999, Indymedia was a collective of independent media organizations on the internet.

The work of these grassroots groups influenced the practice and style of mainstream TV coverage, inspiring the big networks to adopt small, lightweight electronic news-gathering equipment starting in the mid-1970s. This approach let them switch from film to video production and let them spontaneously cover live events and instantly broadcast eyewitness reports.

Grassroots media collectives have more communication tools to use in 2020 than in previous years.

Founded in 2015, the nonprofit Unicorn Riot has used video and social media to livestream coverage for several hours at a time on a nearly daily basis since George Floyd’s death on May 25, 2020. Unicorn Riot can verify and document evidence easily, such as the police role in instigating violence, because its videographers are at events as they unfold.

Unicorn Riot’s viewers get eyewitness accounts of events. Begun in Minneapolis, the organization is supported with private fundraising and has correspondents in Denver, Philadelphia and Boston.

Owner Assaulted by Troopers While Protecting His Business from Unicorn Riot on Vimeo.

Editor’s note: This article was updated June 10, 2020, to delete the reference to the Videofreex covering Chicago’s May Day 1969 and origionally appeared in The Conversation.

Errol Salamon is a Postdoctoral Teaching Associate at the University of Minnesota in the Hubbard School of Journalism and Mass Communication. Salamon is co-editor of the book Journalism in Crisis: Bridging Theory and Practice for Democratic Media Strategies in Canada (University of Toronto Press, 2016).