A Georgia voter casts a ballot on Jan. 5. 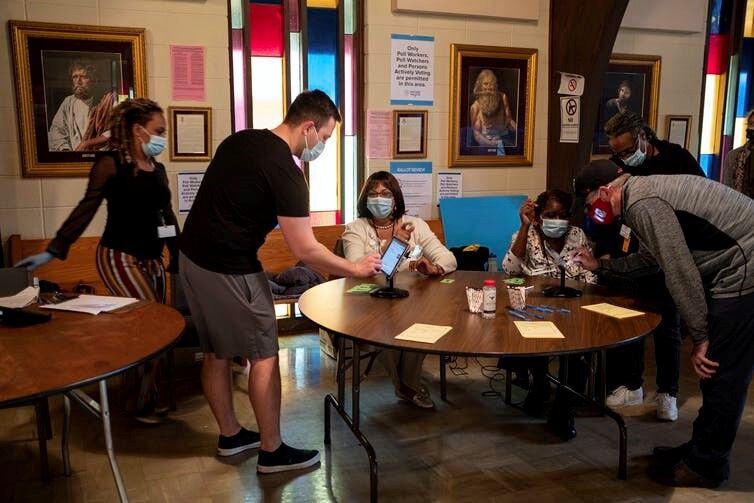 Georgians sign in before voting in the Jan. 5 U.S. Senate runoff election.

The balance of power in the U.S. Senate – and with it ease or hardship for President-elect Joe Biden’s plans for the nation – has come down to Tuesday’s runoff election for both of Georgia’s Senate seats.

It took place under the shadow of baseless and well-debunked complaints from President Donald Trump about the integrity of November’s election – nationally, and in Georgia specifically.

Yet it is true that for decades, it has been hard for many Georgia voters, especially Blacks, to cast their ballots.

Even as recently as June, Georgia appeared to be a poster child for voter suppression and obstacles to voting. There were fewer polling places than in previous years, with failing equipment and absent or poorly trained poll workers, and not enough provisional ballots and other supplies. Coupled with high voter turnout, those factors created lines in majority Black districts that compelled people to wait as long as seven hours to vote. Some were waiting because they never received their absentee ballots, and so couldn’t vote by mail.

As a scholar who studies voting rights and voter suppression, I reviewed the November election, and the runoff balloting indicates that Georgia voters are having an easier time voting. But I cannot escape the fact that Trump’s rhetoric – which appears aimed at convincing his base of primarily white Republicans not to trust the election process – echoes some of the tactics used for a very long time to discourage Black voters, who often support Democrats, from casting their ballots.

Back in June, Republican Gov. Brian Kemp of Georgia blamed problems at polling places on county officials, who in turn blamed the state. By November, things had improved. Poll workers got more training, early voting sites were plentiful and accessible, with at least one Saturday scheduled at each. Voting by mail appeared to operate more smoothly, in contrast to the problems nationwide.

As a result, November’s election, while not perfect, saw fewer equipment problems, significant use of early voting days, and smoother processing of mailed-in ballots. Turnout was historically high. And while the first couple of days of early voting saw long lines, they receded quickly, and voters were able to cast their ballots more easily. Access was made even easier by a state rule that allowed people to cast a ballot in any polling place in their county, rather than forcing them to go to one specific location during the early vote period.

I voted at the State Farm Arena in Atlanta. It took me an hour door to door, of which 50 minutes were spent traveling to and from the site.

November’s Election Day saw none of the long lines that had plagued June’s vote, either. Some of the confusion about where people could vote continued from June, but more people voted early, which meant they had time to leave an incorrect polling place and get to their correct location in time to vote.

Looking at the runoff

For the January runoff elections, early voting has had different problems than those in June and November. Several counties tried to close polling places before early voting began, most in high-population Black areas, perhaps as an effort to limit Democratic voter turnout, which had proved decisive to Joe Biden’s win in November.

Some people who had requested mail-in ballots did not receive them, including filmmaker Tyler Perry, who flew to Georgia from California to vote in person.

Several bomb threats were reported over the weekend, targeting polling places throughout the state.

Nonetheless, polls opened and the runoff voting proceeded, with what appeared to be a higher in-person turnout than in November for most of the day. I saw that some people did still have difficulty figuring out where to vote, mostly because the information on the state website was incorrect or misleading. They ended up casting provisional ballots. And precincts were inconsistent in whether and how they allowed people to use provisional ballots. After work hours, there was a longer wait at one polling place I visited in Atlanta, in part because that site ran out of provisional ballots during the middle of the day.

There were tensions between Republican and Democratic poll watchers and advocates, more than there had been in June. Some polling places had signs warning of the penalties for voting more than once – signs ostensibly to inform voters, but possibly intimidating or worrying for those not familiar with rules and procedures that already limit that possibility.

Despite those problems, things appeared to me generally to be easier for Georgians who sought to cast their ballots than they were in June, and about the same as in November. Many of the traditional voter-suppression efforts, especially those aimed at Black voters, seemed less effective in Georgia for this election at preventing people than they were in 2020.

However, voter suppression isn’t just about whether people who want to vote have trouble casting a ballot. It can also include discouraging people from voting in the first place.

Trump’s baseless claims of fraud in November, and his attacks on state election officials, have been widely characterized as decreasing Americans’ confidence in the country’s democratic system. Some have even worried that it might discourage Trump backers from voting.

During early voting for the runoff, reliably Republican precincts did have lower turnout than Democratic districts. And at a Jan. 4 election-eve rally in northwestern Georgia, Trump’s baseless claims of fraud in November drowned out his message of support for the Republican candidates in the runoff.

But until final vote tallies from in-person voting are available, it won’t be clear whether, or how, the president’s misinformation may have affected turnout.

In the wake of Trump’s complaints, Georgia Republican leaders have begun to propose new changes to the state’s election process, beyond having purged voter rolls, discouraged absentee voting and closed polling places in the general election.

In December, Republican House Speaker David Ralston proposed that the secretary of state, the chief election official who oversees rules and processess for voting, be appointed by the Legislature rather than elected by voters.

Other officials, including Georgia Secretary of State Brad Raffensperger, have suggested that the state eliminate the option for “no excuse” absentee balloting, which allows any voter to cast a ballot by mail. Officials may also explore eliminating drop boxes for absentee ballots, banning governments and third party groups from mailing absentee ballot applications to voters, or requiring photo identification to vote by mail.

In past decades, these potential changes, and any others, would have been subject to federal review under the Voting Rights Act of 1965 to ensure they did not disproportionately affect nonwhite voters’ rights. But the Supreme Court struck down a key part of that law in 2013.

So it is still possible for Georgia’s future elections to look more like they did in June 2020 than the ones in November 2020 and January 2021.

Adrienne Jones teaches courses in American politics, race and law. Adrienne serves as the Morehouse College Pre-Law Director. Her research broadly focuses on the history and politics of black Americans and on legal and public policy issues related to the black experience. Her doctoral dissertation, The Voting Rights Act Under Siege: The Development of the Influence of Colorblind Conservatism on the Federal Government and the Voting Rights Act of 1965, is currently being excerpted for journal publication. She is a regular contributor to the Telegraph Herald on issues of race and politics.

This article appeared originally on The Conversation and is reprinted under a under a Creative Commons license.