The story behind Bruce’s Beach tells a narrative of Black ownership in America. The original property owners of the resort, Charles and Willa Bruce, had their land seized by the City of Manhattan Beach. The local government managed the rights to the land for almost 100 years. However, on Thursday, September 30, the authority of Bruce’s Beach has been given back to the descendants of the original landowners.

The story behind Bruce’s Beach tells a narrative of Black ownership in America. The original property owners of the resort, Charles and Willa Bruce, had their land seized by the City of Manhattan Beach. The local government managed the rights to the land for almost 100 years.

However, on Thursday, September 30, the authority of Bruce’s Beach has been given back to the descendants of the original landowners.

The waves from the Pacific Ocean crashed onto the sandy shores owned by Willa and Charles Bruce. In 1912, as the first Black landowners in Manhattan Beach, the Bruce’s became a family that owned multiple beach plots.

According to documents and records, through corrupt means, the City of Manhattan took ownership of their property, representing the racial imbalance of that time. Looking through a lens of equality today, public officials of Los Angeles County decided to revisit the possibility of returning power of the beachfront back to the descendants of the Bruce family.

Located on 2600 Highland Avenue in Manhattan Beach, California, Bruce’s Beach served as an oasis-like resort for people of color looking to enjoy the scenic coast during times of segregation. Noted previously, Willa and Charles Bruce purchased this piece of paradise for $1,225 ($33,034) and followed suit in buying more land after that.

Other families of color bought beach estates alongside them, forming a Black community of coastal property owners developed during the Jim Crow era. There was a shared notion that only certain races should be allowed selected properties; this agenda was carried out through policies to seize privately- owned land for the betterment of the community.

The distaste in Black-ownership was not hidden; racially charged vandalism and sabotage were found routinely at Bruces’ Beach and similar places. During the Jim Crow era, Manhattan Beach City officials obtained the rights to Bruce’s beach, and other Black-owned coastal plots, through an ordinance known as eminent domain.

Through the eminent domain procedure, certain members of the Manhattan community empowered City officials to acquire privately-owned properties and reinvent the lots for public use. The urgent takeover of the Bruce’s land was to fill the need for a public park. 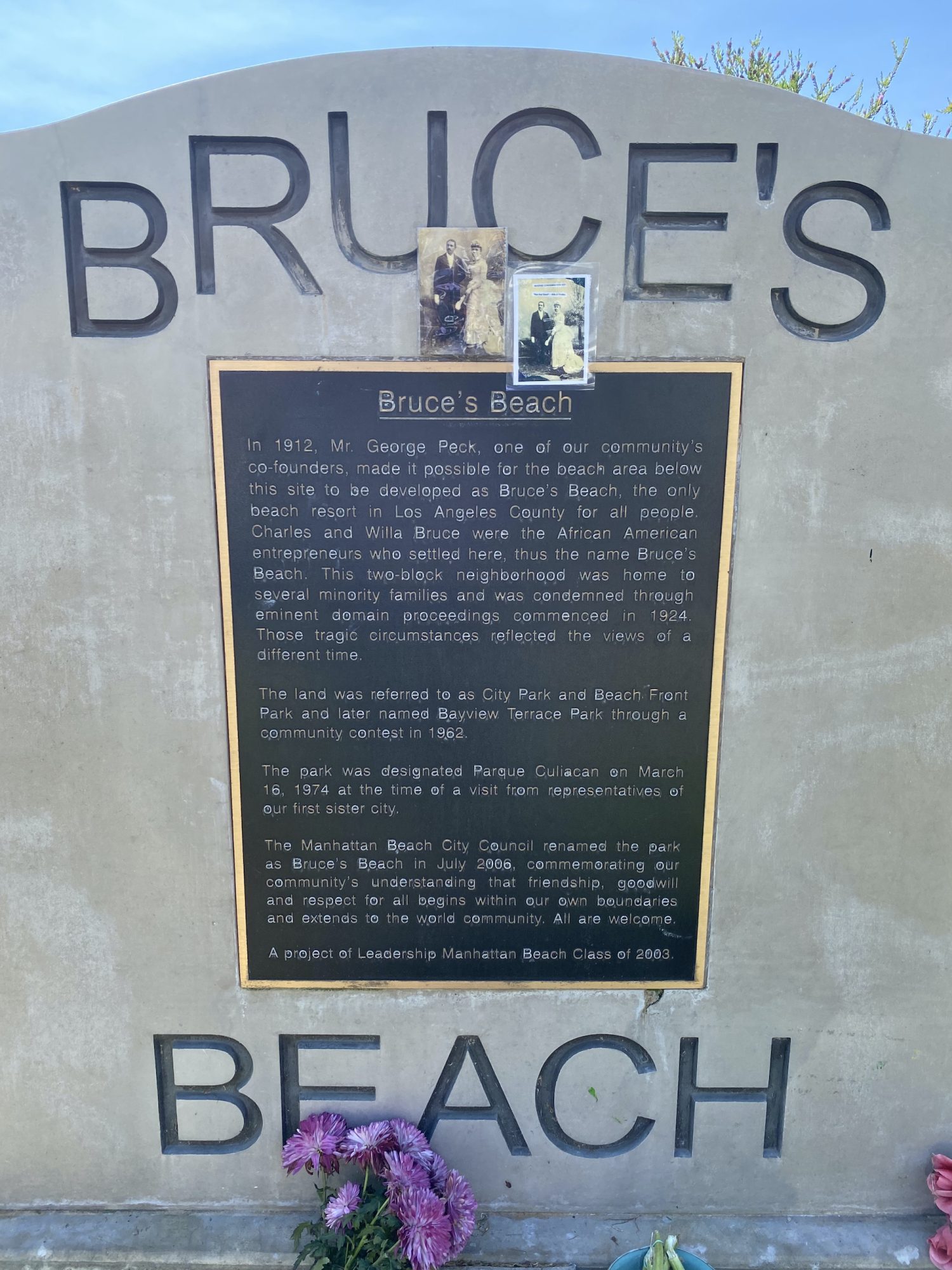 On April 8, Los Angeles County Supervisor Janice Hahn announced steps towards returning the waterfront landscape known as Bruce’s Beach back to the decedents of Charles and Willa Bruce. 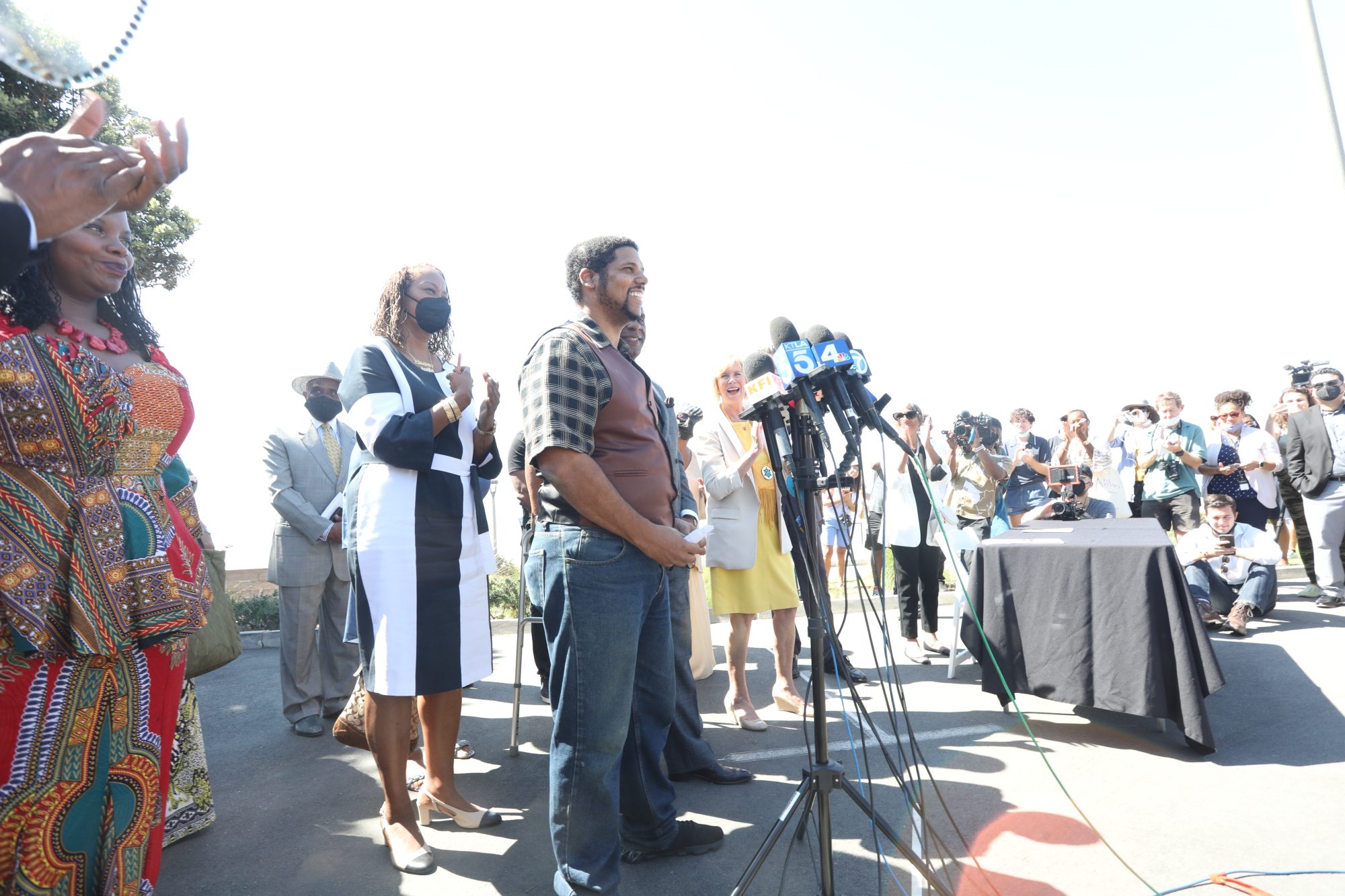 On the day of the announcement, Janice Hahn stated, “The property that was once Bruce’s, is now owned by the County and I want L.A. County to be part of righting this wrong.” She continued, “I am looking at everything from repurposing the property in a way that tells the history of Bruce’s Beach to actually giving the property back to the descendants of Charles and Willa Bruce.”

California State Governor Gavin Newsom announced through a press release, “Moving to Right Historical Wrong.” He signed legislation to return Bruce’s Beach back to descendants of the original owners.

According to the information released by the California state governor’s office, the directive, SB-796, allows Los Angeles County Supervisors to transfer the land immediately to the Bruce family. Soaking up the historical moment at Bruce’s Beach, Newsom was joined by Senator Steven Bradford, Bruce’s family members, and other civic public servants.

The Los Angeles County Board of Supervisors sponsored the urgent measure and authorized the county to immediately begin the process of transferring sources of ownership from Manhattan Beach back over to the Bruce family.

“As we move to remedy this nearly century-old injustice, California takes another step furthering our commitment to making the California Dream a reality for communities that were shamefully shut out by a history of racist exclusion,” said Governor Newsom. “We know our work is just beginning to make amends for our past, and California will not shy from confronting the structural racism and bias that people of color face to this day. I thank the Bruce family, Senator Bradford, the Los Angeles County Supervisors and all those who fought to keep the legacy of this place alive and deliver this long-overdue justice.”

“SB-796 shows us that it is never too late to address the injustices of the past,” said Senator Bradford, a steadfast supporter of the Bruce family and who initially introduced the bill in April with other prominent local leaders. “If you can inherit generational wealth in this country, then you can inherit generational debt too. The City of Manhattan Beach, County of Los Angeles, and the State of California owe a debt to the Bruce family.”

He continued, “This bill passed the Legislature unanimously and with overwhelming community support, making it clear that our state is committed to tackling systemic racism head-on. As a member of the California Reparations Task Force, this is an example of what real reparations can look like. I applaud Governor Newsom for helping us pay a century’s-old debt by allowing Los Angeles County to move forward and return Bruce’s Beach to its rightful owners— the Bruce family.”

Supervisor Hahn released the news through her office by clarifying the power of the legislation by stating, “The legislation does not transfer the land. Instead, it removes restrictions on the land and gives LA County the authority to transfer the property.”

“This is a milestone for us, and I want to thank, not only Governor Newsom for signing this bill into law, but Senator Bradford for his leadership and the entire state Legislature for their unanimous support,” said LA County Supervisor Janice Hahn. “The work is far from done. Now that LA County officially has the authority to transfer this property, my goal over the next several months will be to transfer this property in a way that not only works for the Bruce family but is a model that other local governments can follow. Returning Bruce’s Beach can and should set a precedent for this nation and I know that all eyes will be on Los Angeles County as this work gets underway,” Hahn stated.

That's great news! My tribe is Peoria and I'd like a few acres of that city returned to me too!

Honestly, sarcasm aside, I'm happy for them and hope this is just the beginning of fixing this sort of stuff.