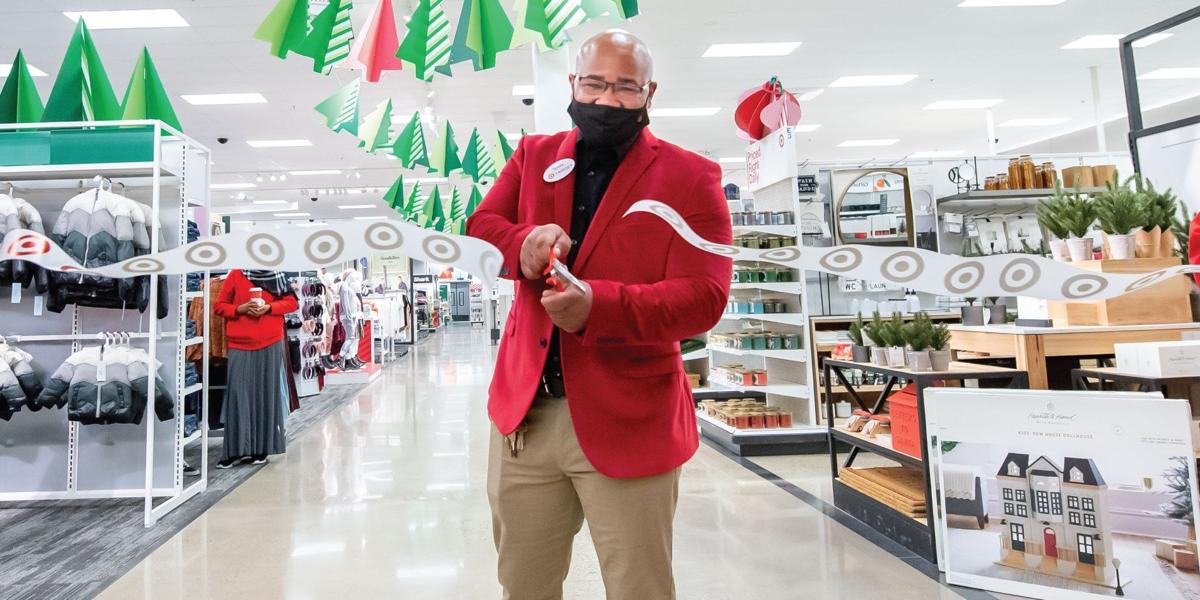 TC Pilson, manager of Lake Street Target store in Minneapolis at the store reopening on November 10. 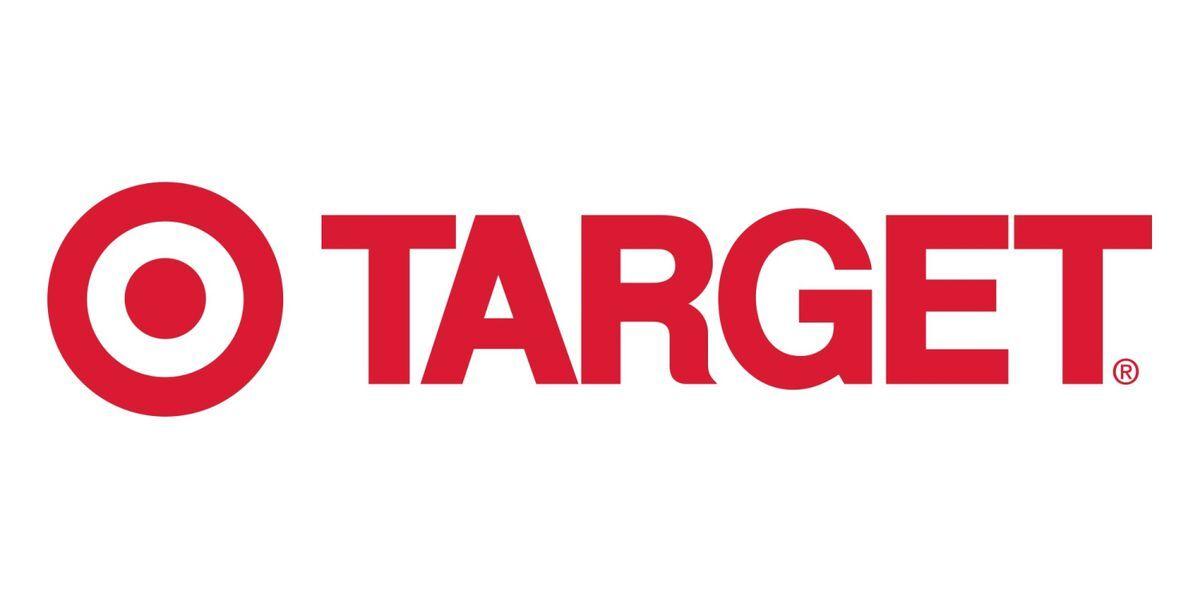 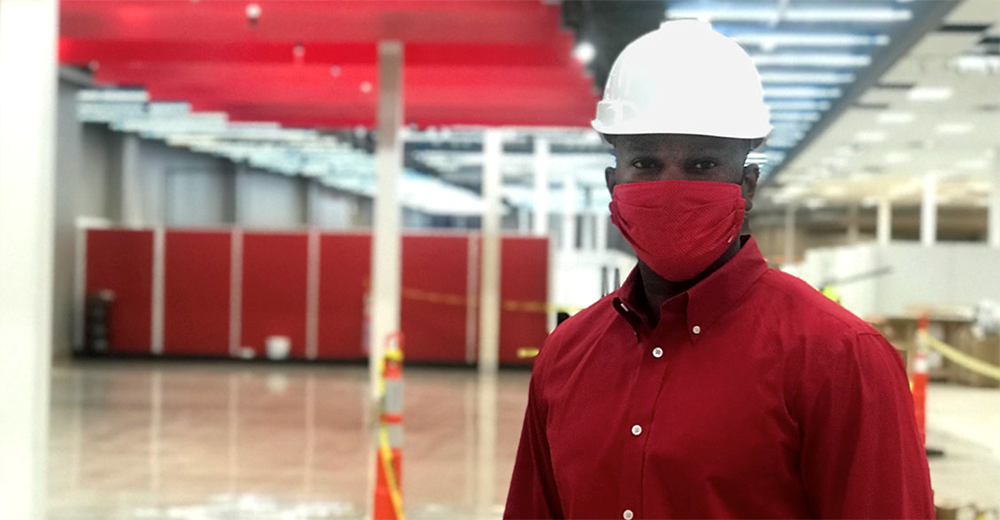 TC Pilson, manager of Lake Street Target store in Minneapolis at the store reopening on November 10.

After closing due to damage sustained during the demonstrations for racial justice in late spring, Target rebuilt the stores from the ground up in about five months, making them two of the fastest rebuilds in Target history.

Target is promising the community to not only have a safe, easy and convenient place to shop, but also a place where customers feel joy and pride when they visit. Guests can expect friendly—and familiar—faces of their local Target team

Hayato Yang, an executive team lead for Food and Beverage said the November 10 reopening was like a reunion.

“Coming back to this team, this location—it’s like seeing family again. This is where I began my journey with Target, and being here with the heart of the store beating again is a joyful experience,” he said in comments posted to Target’s website. “It’s exciting to show our community that we’re not going anywhere. We’re coming back stronger than ever. I’m so happy we can be a place for people in the community to come with their families and see their friends and neighbors again.”

Target said from the assortment of products and services offered, to the layout of the renovated store, feedback from customers guided the reshaping of the Lake Stree store to “better serve the local community.”

Changes included a more accessible pharmacy, a larger food and beverage section, an expanded assortment in categories such as beauty, toys and food, and even an additional entrance.

Adrie Foreman, Lake Street Target Human Resources executive team lead, said many of the store team members live in the Southside neighborhood. She said she stayed connected with them while the store was closed to make sure they had the support they needed. The re-opening is a point of pride for her and her team because most of the Lake Street team members are returning.

“It’s all about making sure the people who live in this community feel like this is home,” Foreman said. “Target is all about family, and you hear that so often at different locations. But this store is even more of a family.”

“I’ve always said it has a type of heartbeat, there’s a pulse to it. I felt that on my very first day,” she said. “When talking to my team this summer, people kept saying, ‘When are we going home?’ For us to bring our team members back to their home is very, very fulfilling.”

Noor Companies, a Minneapolis-based Somali and woman-owned business, was the general contractor for the Lake Street rebuild. The trailblazing company has built a reputation for executing construction and development projects which deliver a larger impact on nurturing the next generation of leaders in the construction industry. Engaging Noor Companies was consistent with a broader corporate vision to ensure Target would meet its overarching business and growth needs.

According to Steve Makredes, Target Vice-President for Constructions, “We realized we were going to have a problem to be able to accomplish the growth we wanted to have as a company. We knew that when your stores are built by the people that shop and work in the store, that creates a broader affinity to you as a brand and as a retailer. So we started to focus on women and minorities in construction to solve a business problem of not having a qualified and available (construction industry) workforce.”

One of Target’s strategies to meet the workforce challenge was to reach out to a rising star within the corporation to help create a pipeline of construction workers. A 2006, Construction Management graduate of Kansas State University, Paul Robinson joined the Target Corporation and quickly rose to become a Construction Project Manager. In 2018, he founded ConstructReach, an enterprise that helps young adults get work experience in the construction industry, a resource that Target engaged to help with construction efforts at both Lake Street and Buckhead South Target in Atlanta.

Target also invested in the Lake Street community’s overall rebuild efforts, even while the store was closed, by donating more than $125,000 in food and essential supplies to those in need and committing to 10,000 hours of pro-bono consulting services to Black-, Indigenous- and people-of-color-owned local businesses.

“I’ve been with Target for 19 years, and volunteering and connecting with the community is key to our purpose,” says Bawang Longar, Assets Protection executive team lead at Lake Street. “We’re part of this neighborhood and want to be part of its healing process, too.”

“I joined Target in 2009 because I wanted to grow my career at a company that was heavily invested in the community. When I became responsible for the stores in the Minneapolis area in January of 2020, I found a real point of pride at the Lake Street store. We’ve operated there for more than 40 years and have become a part of the community, with many of our team members living within walking distance of the store,” he wrote in a message shared internally at Target.

“When George Floyd was murdered nearby, I felt the same anger, despair and exhaustion that I know many of our Black team members and guests across the country also felt. As demonstrations for racial justice followed, I’ll admit I struggled to ground myself in Target’s purpose, especially as a Black man who knows the challenges people of color face in this country every day,” he said. “How do you bring joy to all families in a community that has not only long struggled with economic and racial disparities, but now has been torn apart? In the midst of more injustice, pain and suffering, how do you inspire and bring hope?”

“When I got a call from our CEO, Brian Cornell, I knew the answer. He asked, ‘What do you need from me?’ I told him: We need to reopen our Lake Street store as soon as we possibly can.”

“We want the Lake Street community to view this store as a part of itself, not just a place to shop. So we’re listening to the voices of the community and applying what we’re learning, and will continue to do so,” Williams said.

“We know that local access to essential food, medicine and supplies is critical—which is why … this will be one of the fastest rebuilds of a Target store ever.”

Williams said Target partnered with Lake Street nonprofits such as the YWCA throughout the summer to provide essential food and supplies to those in need. Target accelerated $1 million in grants for small business recovery and rebuilding through the Target Foundation, supported organizations such as African Economic Development Solutions, Latino Economic Development Center, Neighborhood Development Center and Lake Street Council. The company also launched a commitment to 10,000 hours of pro-bono consulting services for Black-, Indigenous- and people-of-color-owned businesses in the Twin Cities to help with their rebuilding efforts. Additionally, local team members volunteered hundreds of hours to help with clean-up and community support in the area, Williams said.

“I know we have opportunities to drive lasting change, and I have hope,” he said. “I feel our purpose in action.”

“Our longer-term commitment is to create a space where the Lake Street community sees itself reflected—from the artwork on the walls to the products on our shelves. We’ll keep listening to you to make sure we get there,” he said. “I know we haven’t even begun to scratch the surface of the impact we can have. I’m excited to be a part of that impact, and honored to be here on the front lines with you.”

Target is headquartered in here in Minneapolis, Minnesota, its hometown since the first Target store opened in 1962 under The Dayton Company.