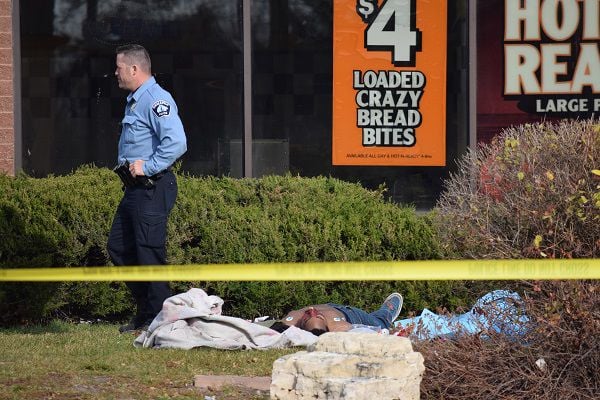 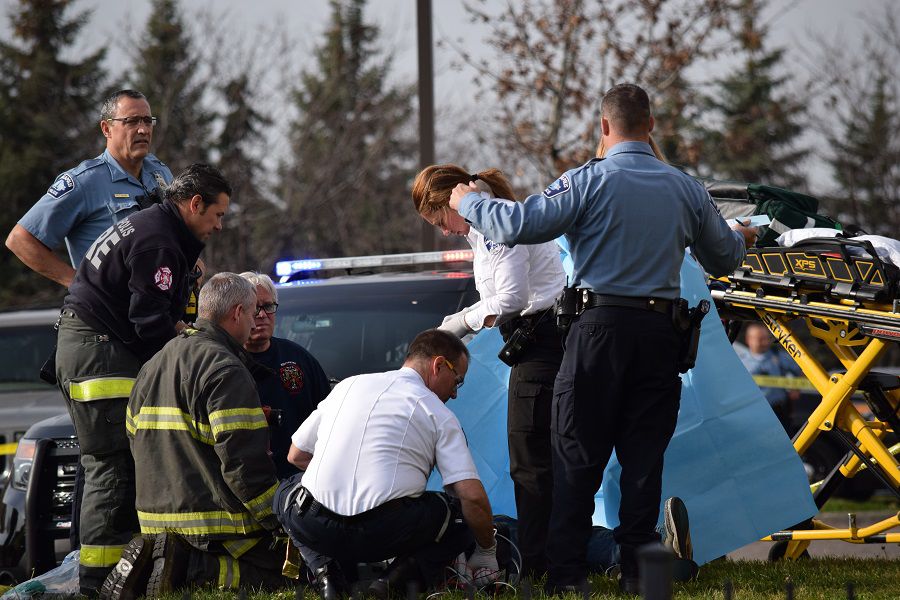 Emergency personnel try in vain to save the life of a man shot minutes earlier on West Broadway Avenue in North Minneapolis. Photo Harry Colbert, Jr.

Emergency personnel try in vain to save the life of a man shot minutes earlier on West Broadway Avenue in North Minneapolis. Photo Harry Colbert, Jr.

Editor’s note: One of the photos that accompanies this commentary is graphic in nature but was included to underscore the urgent need for us to address the issue of violence within our community.

As I am writing this there is dead body lying less than a half block away from me.

But just 15 to 20 minutes ago that body was a soul – a living, breathing human being. That body, bloodied and riddled with bullet holes, was a living person just 20 minutes ago. By the time you read this, that body would have been identified and off to the morgue for autopsy. But at this moment … in this moment … the body of a man is lying on the ground just outside of a Little Caesar’s on the busiest street in North Minneapolis. A child is peering out of the window of the restaurant looking at the man. No person, let alone child, should have to see such a sight. And I am sick. I am literally sick.

At the time of writing, it is Thursday, Nov. 17 at 11:30 a.m. Yes, 11:30 a.m. Broad daylight. And quite frankly, I am struggling to come to grips with what just happened. I am shaken to the core. Not out of fear because of the close proximity … I heard every shot from outside of my office … every single shot … but I am shaken because I can’t take the blatant disregard for humanity.

This wasn’t the cops that killed this man. The KKK didn’t come into our community and shoot five or more times.

And you may not have pulled the trigger, but collectively, we are responsible for this. We own this. We can’t celebrate our many wonderful successes, yet ignore our glaring failures. It doesn’t work that way. We can’t march for justice when one of the “others” kills us and not be willing to march for peace to stop us from killing us.

What is hurting me the most is the normalcy in which people seem to be taking the killing. With a human soul having just been lost – the body lying on the ground … people stopped for a bit, shook their heads and continued on their ways.

While a man who was just murdered lay less than 50 yards away, an employee at the Burger King directly across the street washes the store’s windows. A block south of the killing, children on recess are swinging on swings and playing jump rope.

Why is this normal? In what reality is this supposed to be normal? How did this become normal?

Sadly, this isn’t the first time I’ve heard shots in my newly-adopted neighborhood. I’m begging that this be the last.

Even sadder, because of my urban living, both in Minneapolis and my hometown of St. Louis, I knew from the sound of the gunfire that someone was hit. Let that sink in. I knew from the sound that someone was struck by the bullets. Because of the frequency of hearing gunshots, my ears have been trained to know when shots are random or intentional. I was able to discern that due to the progression of fire this was an intentional act with a honed-in target. When the shots let off I said out loud to myself, “Damn, that’s not good. That’s not good at all.” It didn’t take the screams that came about 15 seconds later for me to know. I knew instantly.

Camera in hand I walked toward the site of the shooting. Police were on the scene and paramedics had just arrived. I lifted my long lens, zoomed in and snapped a photo. What I captured I hope to never see again. What I captured was emergency personnel backing off of the once living; now deceased. The man’s face covered in blood. That image will haunt me for quite some time.

He is gone and there was nothing they could do to bring him back. He’s gone. The question is, what can we do to stop the next senseless killing before the bullet exits the chamber. Please help me in finding the answer. We need answers. I need answers. This can no longer be accepted as “normal.” I won’t accept is as normal.

There is dead body laying less than a half block away from me.