Across the Northeast, Midwest, South and Southwest United States, homeowners are watching with horror as their lawns turn from green to brown, sometimes in less than 48 hours, and wondering, “What happened this year – and how did it happen so fast?”

The culprit: the fall armyworm.

As an entomologist, I can attest that their appearance is nothing new: They’re an annual problem, but the scale of this year’s invasion is unprecedented. These voracious feeders are destroying lawns and grasses, attacking golf courses, pastures, football and soccer fields – and they can completely defoliate rice, soybean, alfalfa and other crop fields within days. They are called armyworms because of their habit of marching across the landscape.

The fall armyworm, Spodoptera frugiperda, isn’t a worm. It’s a striped caterpillar, the larvae of an ordinary and benign brown moth. It’s native to the Americas and is extremely adaptable, thriving everywhere from lush forests to arid regions and in pristine, disturbed and urban landscapes. 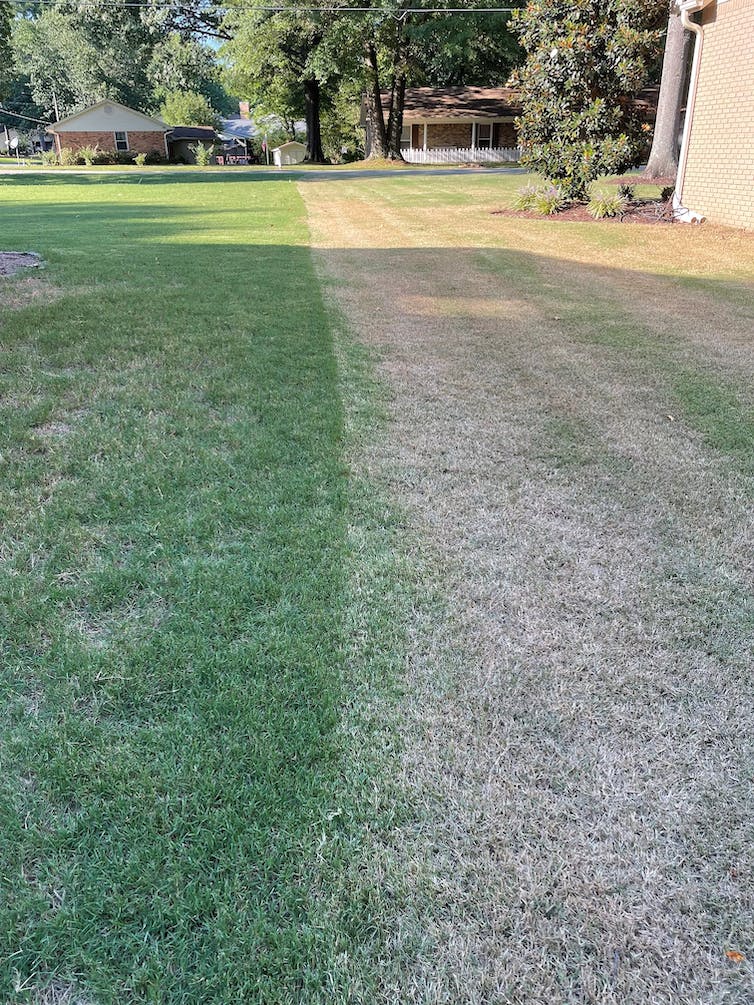 This moth survives year-round in warmer locales, from the tip of South America to the southern U.S. Each year they invade more northern regions until cold weather ends their occupation.

From larvae to moth, its entire life cycle is about 30 days during the summer and 60 in spring and fall. Adult moths survive just two weeks. During that time, a female lays up to 2,000 eggs, deposited underneath leaves in clusters of 100 to 200.

The moths aren’t the problem; it’s their larvae. When eggs first hatch, the tiny caterpillars are barely noticeable, about one-sixteenth of an inch long. By the time the caterpillars reach full size – an inch and a half – they’ve become ravenous eaters.

During its short life cycle, the fall armyworm can devastate important crops.

Depending on the season, the armyworms eat and grow for 14 to 30 days. Initially, they chew holes in leaves, sometimes reducing them to a lacework skeleton. If they run out of food, they become cannibals, with the larger armyworms preying on the smaller ones.

Then they burrow into the ground, encase themselves in a cocoon and pupate. When they emerge as moths, the cycle repeats, with the next generation propelling their expansion across the country.

Meanwhile, fall armyworms have spread across the globe as an invasive species, reaching the Near East, Asia, Australia, Africa and India. Without its native complement of parasites, predators and diseases to control it, these rapacious caterpillars pose a serious agricultural threat to these newly invaded countries.

Farming practices have fueled their proliferation. Most of these countries do not grow armyworm-resistant GMO crops and many have limited access to newer insecticides and modern application equipment.

Armyworms have been particularly destructive in sub-Saharan Africa, where they devour maize, the continent’s staple crop. Damage is estimated at US$2 billion per year. It also causes major damage to corn, rice, sorghum, sugar cane, vegetable crops and cotton.

Entomologist David Kerns sounded the alarm in June, warning that armyworms in Texas were bad and heading north and east. They’d gotten off to an early start, aided by good weather in their winter home range.

Once the moths are on the move, they leave their natural enemies behind, taking their new territories by surprise. They can migrate hundreds of miles, riding the winds to reinfest the northern part of their domain. But with an early start this year, they rode the winds farther than normal. By the end of August, much of the southern U.S. east of the Rocky Mountains had suffered serious assault, akin to a plague of locusts. 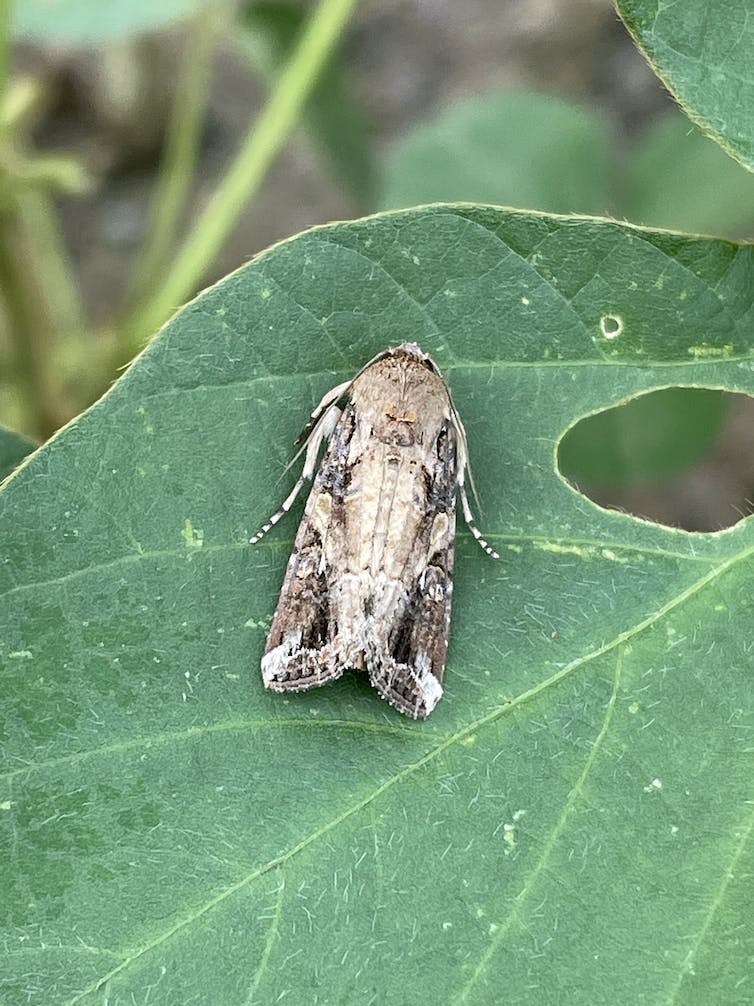 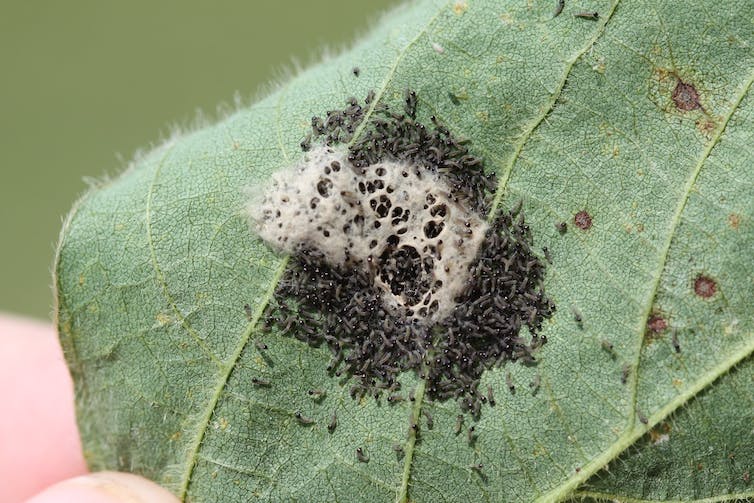 How do we control the invasion?

There are two ways to deal with an infestation: Wait it out, or fight. For those concerned about lawns, waiting may be the answer. Armyworms don’t feast on all grasses, and a well-established lawn will often recover, though it may not look great for a while. However, armyworms particularly love freshly laid sod, which may sustain irreparable damage.

Waiting it out isn’t an option for farmers. Applying insecticides is the only way to save crops, which may prove difficult as pandemic-fueled disruptions have left some insecticides in short supply. Success is a numbers game: Killing 80% of a group of 100 armyworms controls them, but with larger numbers of armyworms, killing 80% still means many crops will be devastated.

Some evidence also suggests that fall armyworms may be developing more resistance to certain insecticides, and it wouldn’t be the first time. This pest is infamous for developing resistance to the insecticidal proteins from Bacillus thuringiensis produced by genetically modified crops. My colleague Juan Luis Jurat-Fuentes is trying to understand how the fall armyworm becomes resistant to Bt toxins in Bt corn and cotton.

His work is also revealing how insecticidal protein-resistant armyworms are spreading their genes across the Americas. We are currently collaborating on a project using gene silencing to help control outbreaks of fall armyworm. The technique can turn off specific genes, including those that make the fall armyworm resistant to insecticides. The goal is to develop extremely specific and effective insecticides that have minimal impact on the environment and other wildlife species. 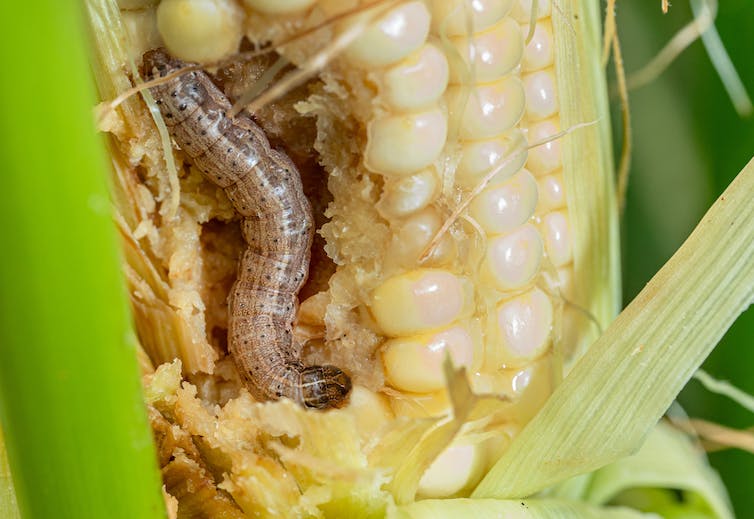 The cost – and the future

The economic costs of fall armyworm invasions are high. This year alone they have preyed upon millions of acres of crops, hayfields, lawns and turfgrass. Farmers, homeowners and businesses have spent tens of millions of dollars on insecticide applications. Some farms have suffered major crop losses.

The battle is not quite over. It will continue for a few more weeks as the fall armyworm continues to spread farther north and east.

Was this “year of the armyworm” a fluke? Will they be back? The answer to both questions is probably yes. We don’t know why fall armyworms started off en masse in 2021, but the extreme infestations were hopefully a rare anomaly. There is concern, however, that a warming climate will allow these and other subtropical and tropical insects to expand their territories northward.

We do know that armyworms will reinvade much of the Southern U.S. every year as they always have, and northern states should expect more frequent incursions from insect neighbors to the south.

This article is republished from The Conversation under a Creative Commons license.