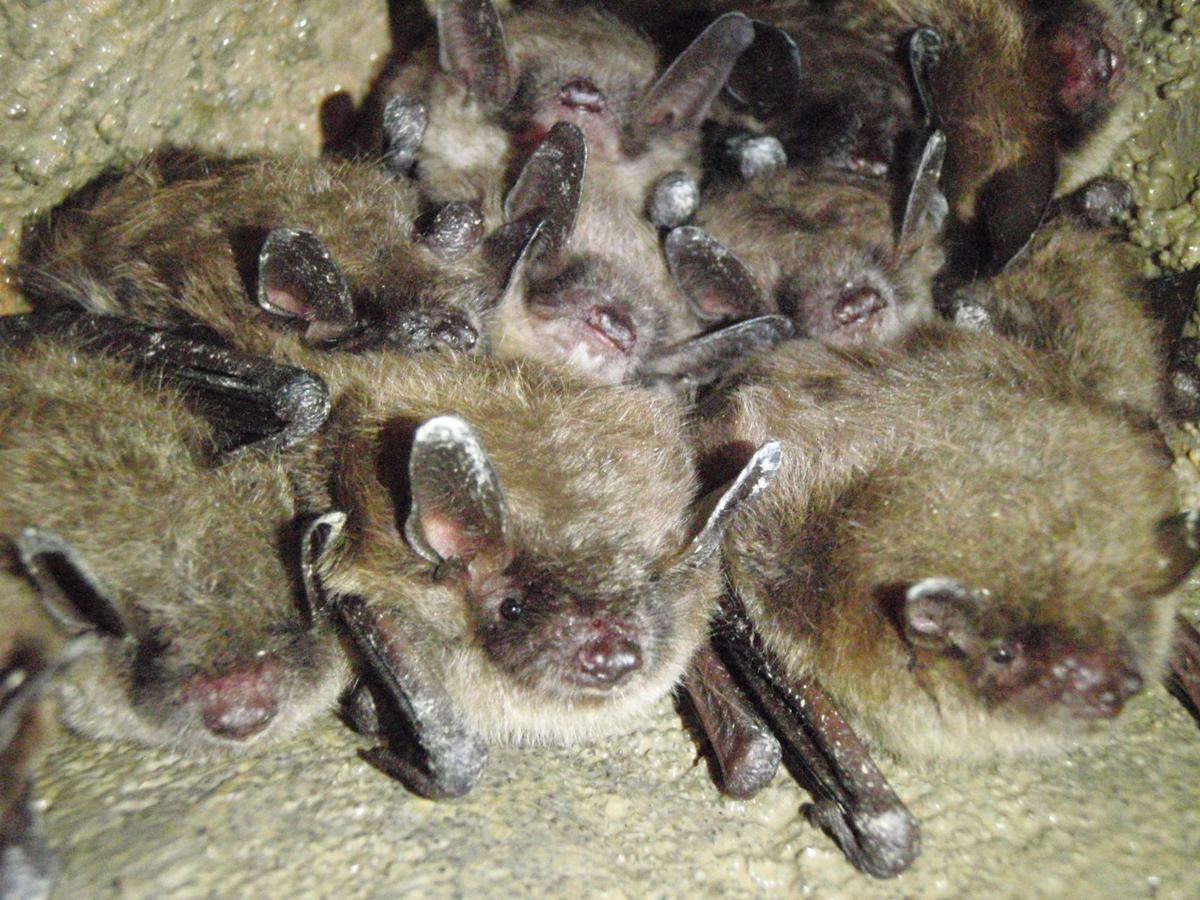 A bat cluster at Mystery Cave in southeastern MN. 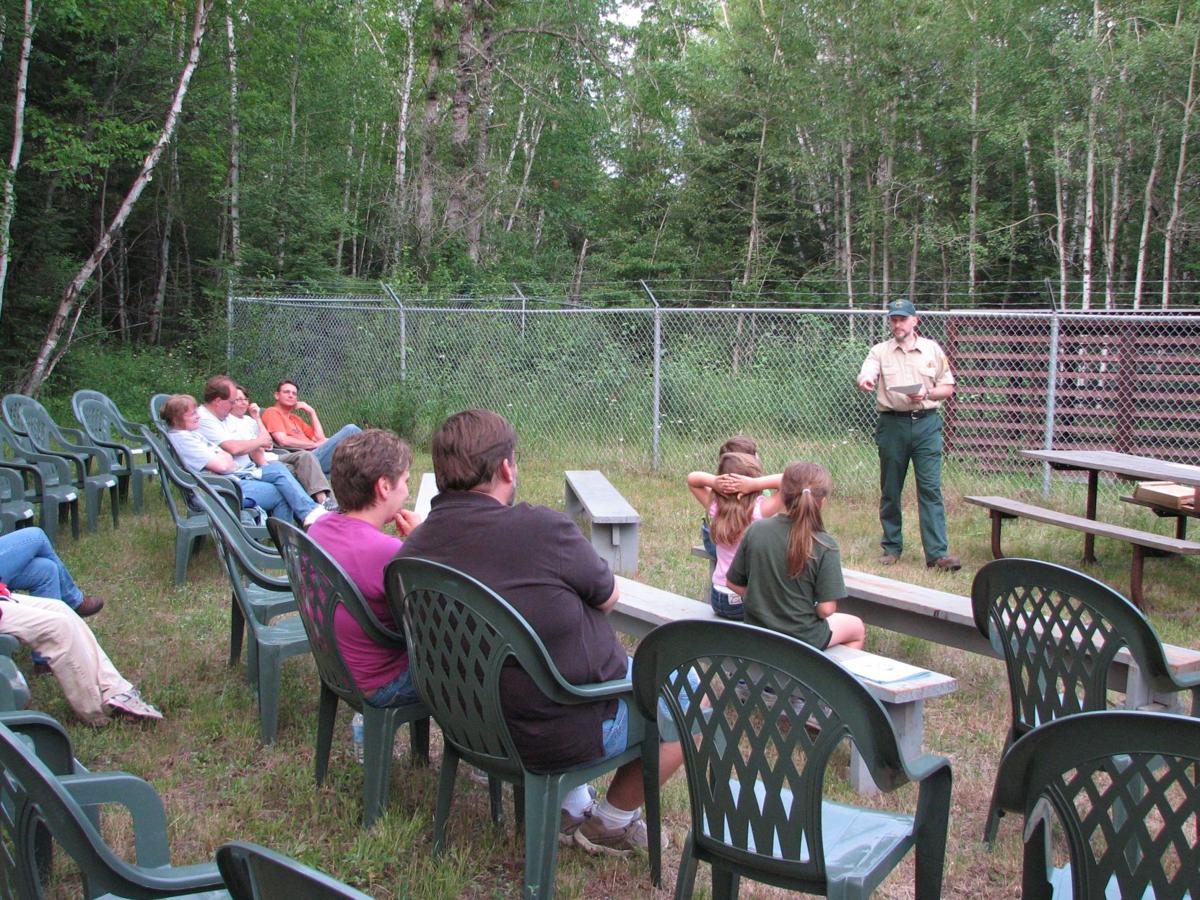 James Pointer teaching about bats at Sudan Underground Mine.

A bat cluster at Mystery Cave in southeastern MN.

James Pointer teaching about bats at Sudan Underground Mine.

Why should they care? After all, folklore and popular culture suggests that bats are scary. Minnesota DNR researchers, scientists, naturalists and park managers have a different view on the small creatures. Some staff members really like bats and teach about them; others are doing their best to protect them from the disease.

Since 2009, the DNR has worked with University of Minnesota scientists, other state, federal and tribal agencies and local group to fight the disease now reported in 10 Minnesota counties. There are eight bat species in Minnesota, and four of those species are vulnerable to WNS.

The declined population impacts humans in that fewer bats means more flying bugs. Bats prey on flying insects like mosquitoes, moths and biting flies. A pregnant bat will eat enough insects to equal its weight, Nordquist said. More biting insects creates problems for humans as well as for agricultural crops that become susceptible to insect infestations without bats to keep the bugs in line.

“Our bats have no resistance since with a fungus, they can’t develop an immunity, just resistance,” said Storlie.

The fungus, which originated in Europe, flourishes in cool environments. The fungus attaches to a bat, which awakes from hibernation and becomes active. That activity causes the bat to burn too much fat and they starve. WNS also compromises a bat’s immune system.

Meanwhile, as WNS continues its onslaught on bats, so does popular culture and myth.

North American bats don’t suck blood, nor do they fly into people’s hair. Nor are they blind. In fact, bats have a lot going for them.

“How cool is it that they hang upside down, they are the only mammal that flies, and they use echolocation to find food and fly around without hitting obstacles,” said James Pointer, a senior interpretive naturalist at Soudan Underground Mine.

He teaches “Batty About Bats” programs designed to show the public why bats are important and non-threatening. Movies and stories depict bats as scary. Plus they are active at night, which means people never see them really well.

“When people learn more about bats and see the great impact they have on our environment and well-being, it eases their fears,” said Pointer.

During his presentation to mine visitors, Pointer explains that bats have specialized diets depending on their species. Little brown bats eat a variety of insects, with mosquitoes making up only 20 percent of their diet, and big brown bats focus on beetles. He added that if you buy a bat toy or decoration, they’re usually black. However, most bats are brown in color. When Pointer’s children were young, he read “Stellaluna” to them, a story about a bat and birds and how they are both similar and different.

To ensure that future generations of children have the chance to read and learn about bats, the DNR continues to monitor the health of bats. Winter and summer monitoring takes place, and the DNR continues to assist with research projects designed to track WNS growth as well as find a cure. During one data-collective visit to Mystery Cave, Storlie watched as Gerda Nordquist used a tip to swab a bat. He gets questions from cave visitors about bats, he said, some who are curious and others who show fear.

“Education is the best thing,” said Storlie. “Some may have a fear of bats, but once they understand the value of the creatures, they start thinking more positively.”

The Minnesota DNR needs your help to watch for unusual winter bat behavior. It also want to know about any summer bat colonies. Persons can send bat information to the Online Bat Observation Report at www.mndnr.gov/reportbats, or contact the MNDNR Minnesota Biological Survey bat specialist, Gerda Nordquist, at (651) 259-5124 or gerda.nordquist@state.mn.us.