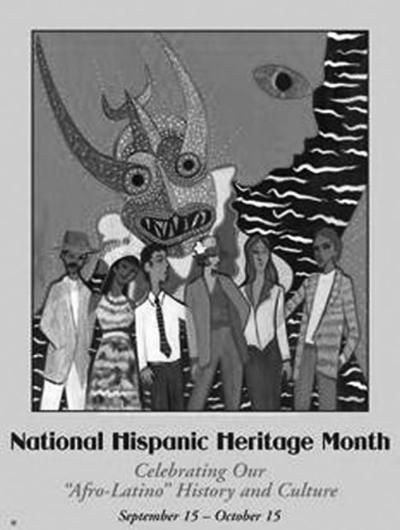 Do you find your hips swaying, your shoulders with a mind of their own when you hear the rhythm of the beat of a Spanish tune? Well, it’s no wonder. It may very well be in your blood, in your blood line that is.

The Latin beat can be traced back to the diaspora when Africans were stripped of everything in their lives and forced into enslavement. Scattered throughout Latin America and across the world they were able to keep traditions of their continent alive through beat of the drum, the sound of the music. The sounds of Samba, Salsa, Merengue, Bachata are just a few of the reverberations born from African beats.

Every year the Latino flair is showcased by a month-long celebration. Enacted in 1968 by President Lyndon Johnson, Hispanic Heritage Week was expanded to a month, September 15th - October 15th by President Ronald Regan in 1988.

While the dates were selected to coincide with impactful celebrations in several Latin American countries, the reality is the dates fall in the front end of a new school year oftentimes its meaning getting lost in the shuffle. Most of us finding ourselves with less time to plan a meaningful, informative and educational series of events commemorating the contributions of Latinos-Americans.

Contributions dating as far back as 1565, when, according to PBS www.pbs.org/latino-americans/en/timeline, “Saint Augustine brings the first European settlement to the United States, introducing Catholicism and the Spanish language in Florida.”

In 2018 as most of us seek connection to our ancestors and fuel our passion to share their stories with our descendants, we are embracing our historical lineage. Connecting the proverbial dots that lead us all to Africa.

Afro influence impacted African-American music. Jazz, for example had a colossal influence in creating Latin music rhythms such as Rumba and the Mambo. Different types of those beats, like R&B and Hip-Hop illustrate the development of Latin music categories which include Urban and Reggaeton music.

From ‘Come on shake your body ,baby, do the Conga’ (Gloria Estefan Miami Sound Machine 1983); ‘Blame it on the Bassa Nova, the dance of love’ (Edie Gorme 1963) , the Cha Cha Slide (Dj Casper 2011) to twerking (which according to Wikipedia “is directly linked to Africa and the African Diaspora… a type of dance originating as part of the bounce music scene of New Orleans in the late 1980s”) the African beat, continues to beat its tune.

Fun fact 1: Equatorial Guinea is the only sovereign African state in which Spanish is an official language.

Fun fact 2: A national survey* of Latinos answering the question “Do you consider yourself to be Afro-Latino, Afro-Caribbean, or Afro-(country of origin), or not? Yield the following results: 73% Latinos considered themselves Not Afro-Latino; 24% identified as Afro-Latino and 4% Did not know/refused to answer. The results? A quarter of US Hispanics identify as Afro-Latino.

I’ve often hoped African Americans would embrace their Latino heritage with more vigor. If we stand still for a moment and reflect on the extension of each of our own nucleus circle of family and friends perhaps we will discover a direct connection to the Latino in all of us. While we have cultural and language differences the bottom line is we have more similarities than differences. Western traditions may dictate our lifestyles but it’s the rhythms of the African beat that continues to keep us connected.

So, when you’re at the check-out line and hear ‘the beat’ go ahead sway, gyrate and boggie with style. It’s a cultural thang.