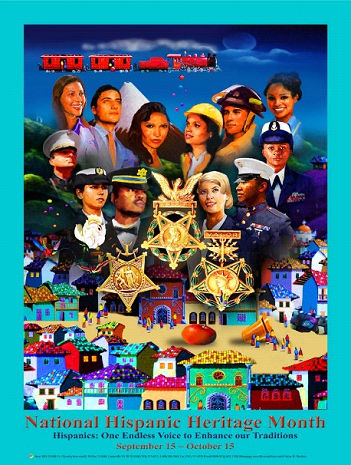 A proud heritage, a propensity towards service built on tradition and culture is depicted in this beautiful image ‘One Endless Voice to Enhance Our Traditions’ poster celebrating National Hispanic Month September 15th – October 15th, 2018. One endless voice in harmony, oftentimes in two languages, always enhancing our traditions.

On the heels of the civil rights movement, a week of awareness for the contributions made by Hispanic Americans was enacted in 1968 by President Lyndon Johnson. Twenty years later it was given a full month in 1988 by President Ronald Regan. Fast forward to 2018, fifty years later we are still grappling with the million-dollar question “What’s the difference between Hispanic and Latino?”

I’m about to give you the 411 on this perplexing dilemma. What is the difference between Hispanic and Latino. Citing some of the work by Terry Blas a writer/cartoonist and creator of the web series Briar Hollow I’m about to help simplify the answer.

“Latino is a term that tells us about geography. Hispanic is a term that tells us about language.” Okay this is where it can get a bit confusing. Blas continues to say “Latino refers to someone coming from Latin America which includes mostly every country below the USA including the Caribbean. Hispanic means coming from a country whose primary language is Spanish.” There’s a catch, though, not every country in Latin America has Spanish as the main language.

“For example,” says Blas, “someone from Brazil is Latino and not Hispanic because Portuguese is the main language there, not Spanish. While someone from Spain is Hispanic and not Latino because Spain is not a country in Latin America. Afro-Latino, Muslim Latinos, and Asian Latinos have been excluded from the conversation but continue to shine the focus on the flexibility of the words used to describe themselves.”

Someone like myself is both Hispanic and Latina. I’m Latina because of the country of origin my family is from, the territorial-commonwealth island of Puerto Rico in the Caribbean. I’m Hispanic because Puerto Rico’s primary language is Spanish. P

Wait, there’s more. Joining the illusive Hispanic vs Latino conversation is LatinX a new term that is gaining momentum in the discussion. According to http://remezcla.com “…the term LatinX – which has existed online since at least 2004 – arose as a gender-neutral alternative to Latino and Latina. However, some believe that Latino already effectively groups a large number of men and women with Latin American origins and that substituting the O for the X unnecessarily complicates the language.” Proof of the fluidity of diverse terms to describe this growing population. Further proof of the power of the millenniums who know what they want.

No matter the term used. No matter the language. The 2018 National Hispanic Heritage Month poster ‘One Endless Voice to Enhance our Traditions’ says it all. Pride and hope for the future in the eyes of the diverse community of Latino/a’s, Hispanics, LatinX generations of exceptional role models. The contributions in the armed forces, civil service, entertainment and the arts, medical, judicial, sports world, science, anthropology to name a few, is a historical noteworthy section for our nation’s history books.

A special ‘gracias’ to the folks at diversitystore.com for allowing us to share their beautiful artwork with our Insight News-McFarlane Media family. With a variety of products for over seventeen special observation themes, including Black History Month diversitystore.com is the place to go for quality items portraying honor in all themes. Go to www.diversitystore.com or call 1-800-200-5964 for information.