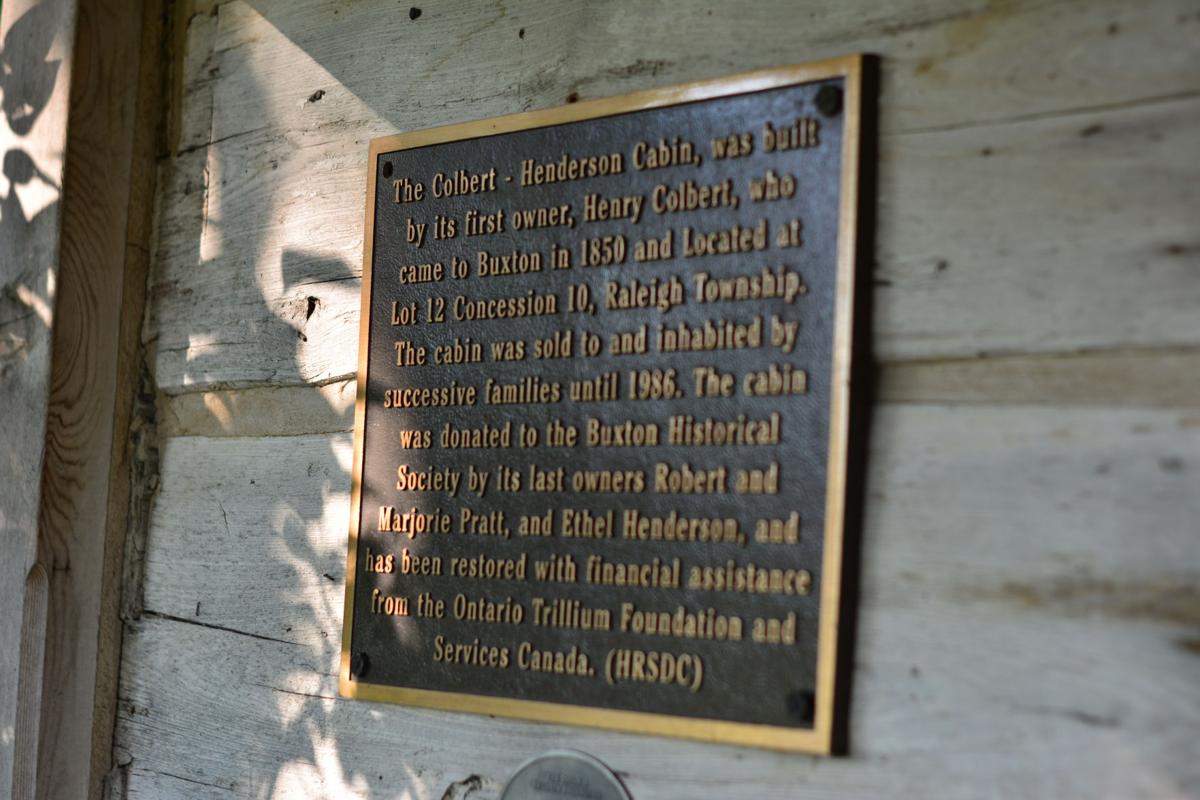 A plaque outside one of the original log cabin homes in North Buxton, Ontario. 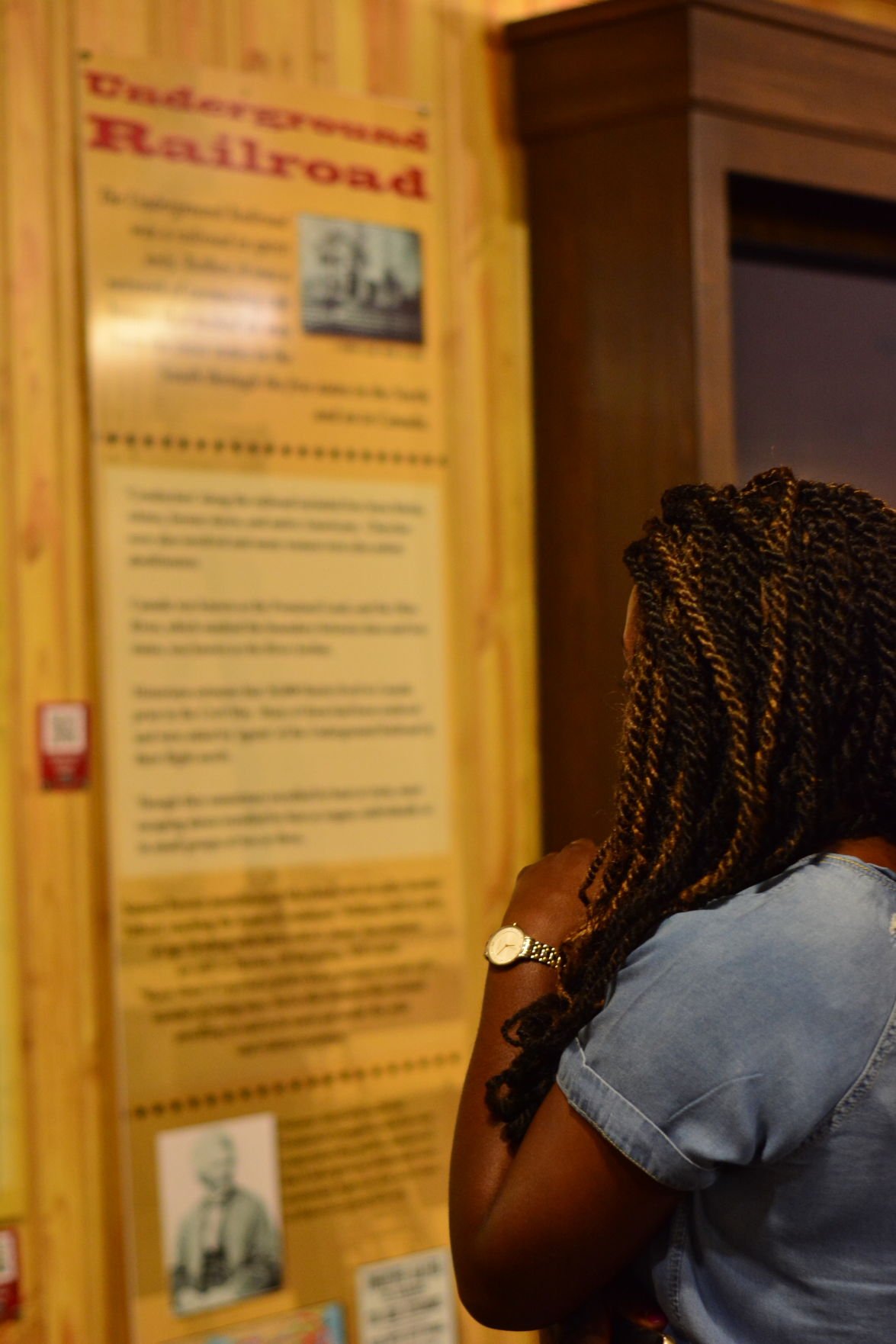 Inside the Buxton National Historic Site & Museum, Devonda Scott takes in the history of North Buxton and the Underground Railroad. 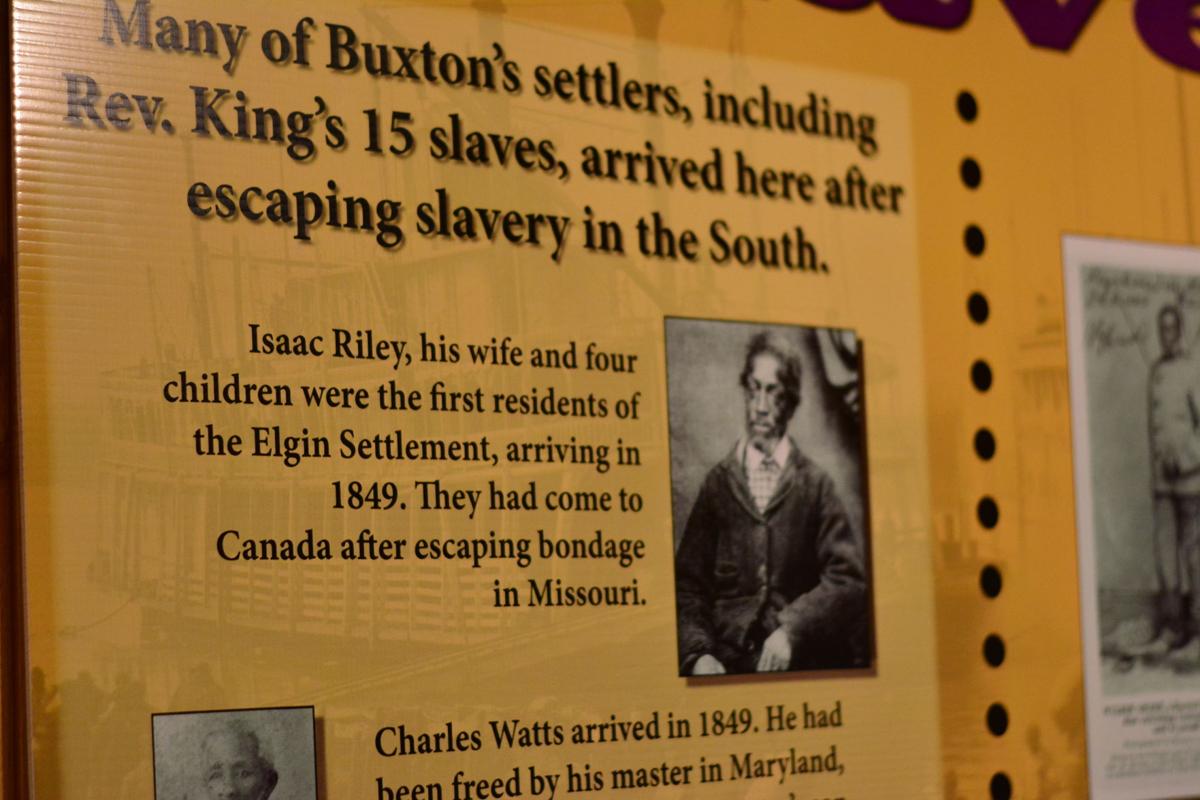 An exhibit inside of the Buxton National Historic Site & Museum. 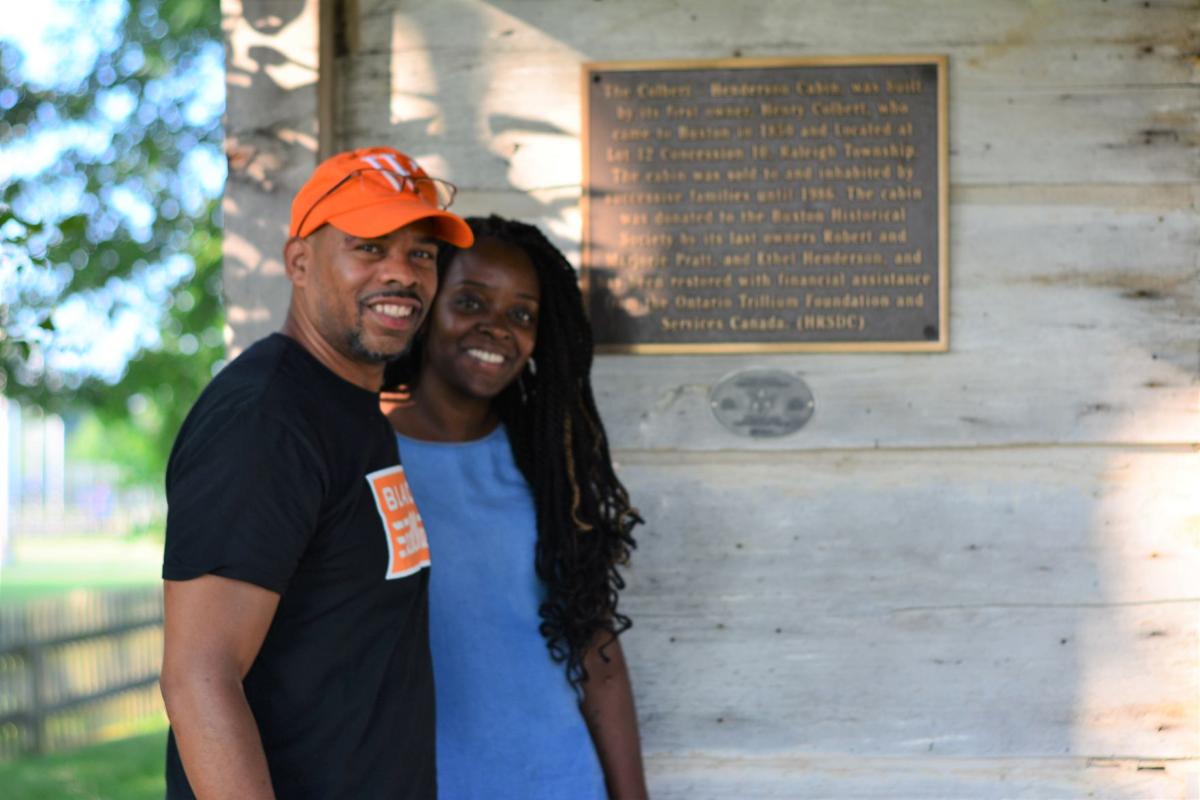 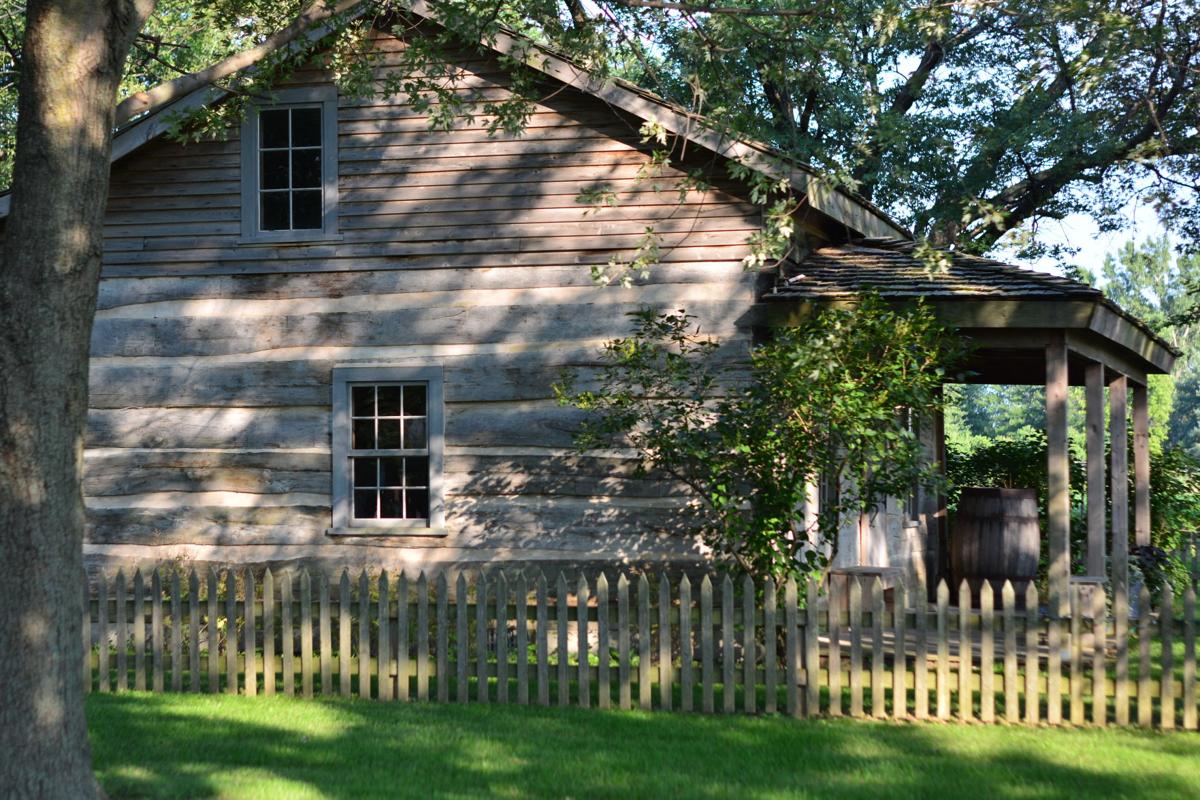 A plaque outside one of the original log cabin homes in North Buxton, Ontario.

Inside the Buxton National Historic Site & Museum, Devonda Scott takes in the history of North Buxton and the Underground Railroad.

An exhibit inside of the Buxton National Historic Site & Museum.

It is truly a field of dreams … and it’s not in Iowa.

More importantly it’s not in the United States. That’s by design. The field of which I speak is in Canada … Ontario to be more specific … North Buxton to be exact.

North Buxton is about an hour’s drive outside of Detroit but trust me, it’s a world away. For Blacks living in the United States … descendants of slaves … it should be required travel, looked forward to like many of us look forward to homecoming at a HBCU.

Before I tell you about this nirvana let me tell you how it came to my attention.

I was planning a trip to Detroit for the annual National Association of Black Journalists convention. I was nominated for an award and was of course looking forward to the trip. Though only in “The D” for a weekend I had a mental itinerary prepared. One of my favorite artists, Kem, was performing Friday night and my girlfriend and I had plans on attending. We didn’t make it.

We didn’t make it because a couple of days before our departure I was talking to my good friend, Dr. Juneau Robbins, about the pending excursion.

“Well if you’re taking your passports you can go visit my hometown, North Buxton,” suggested Robbins. Then he hit me with this fine little nugget. “It’s one of the last ‘stops’ on the Underground Railroad.”

Indeed, settled in 1849, North Buxton holds a special place in history. With land purchased by abolitionist, the Rev. William King, escaped slaves and free Blacks fearful of being enslaved made the fateful and perilous journey to the wooded Canadian land … to paradise. At it’s peak, North Buxton was home to nearly 2,000 residents. Today that number is about 200.

When I told my girlfriend, Devonda, about this historic place we knew the Kem concert would have to be missed. We were on a quest.

After landing in Detroit and grabbing a rental car we plugged “directions North Buxton” into the phone and off we were. It took us about 45 minutes to get through traffic to the U.S./Canada border crossing.

“Passports please. Traveling with any food, weapons or alcohol? Where are you headed and what’s the reason for your trip,” sternly asked the Canadian border agent.

“I’ve never heard of it. Why are you going there,” asked the agent.

I proudly declared we were going to one of the last “stops” on the Underground Railroad. The agent said she was unfamiliar with the town but thought it was fascinating (my words, not hers) that we were going. Fascinating indeed.

For the next hour or so we drove through rural farmland heavily dotted with wind turbines. With only a couple of turns off the main road our phone navigation announced, “you’ve arrived.”

Where we arrived was a softball field. In front three benign buildings; one a log cabin, one an old schoolhouse, one a more modern ranch-style dwelling. A sign read “Buxton National Historic Site & Museum.” As we sat in our car trying to figure out what to do next … we were seemingly in the middle of nowhere … several cars began turning into the lot with people exiting with gloves and bats. A game was about to begin. It needs to be noted the people in the lot appeared to all be white, which for two Black people used to how things are in the U.S. – in particular, rural U.S. – caused us some consternation. I noticed one person who appeared to be of African ancestry, but I couldn’t be certain. I decided we’ve come this far, let’s complete the mission.

I cautiously exited my vehicle and went up to one of the ballplayers and declared our mission. I told the man we were from Minnesota and a good friend – Juneau Robbins – directed us here.

Tim Robbins quickly introduced us to several others of the Robbins clan. He informed us the Museum was closed; our hopes of going inside were briefly dashed. But another of Juneau’s cousins, Heather Robbins, said she used to have the keys to the building but didn’t anymore. She then asked another ballplayer – Lori – if she had keys. Indeed, she did, and we were escorted to the building. They were opening the museum just for us.

“Feel free to look around as long as you like; when you’re done just let us know so we can lock up. You’re friends of Juneau so that’s good enough for us,” said Lori.

On the walk from the field to the museum Lori gave us a brief history of the Canadian settlement. She walked us over to the log cabin – one of the original ones built by settlers – and told us how one cabin could be erected in a day with 12 men and two oxen. She told us of the proud tradition of hard work among the North Buxton settlers and the importance of everyone earning their own keep. Camera in hand, Lori asked to see my camera so she could take a photo of Devonda and me in front of the log cabin. As we walked onto the porch of the modest, yet impressive cabin, I noticed a plaque. I was stopped in my tracks. I felt an immediate connection.

As it turns out, the one surviving cabin from the first settlers was known as the Colbert Henderson Cabin. It was owned by Henry Colbert. Now I have little knowledge of by paternal lineage past my grandfather, Everett H. Colbert, but needless to say, I laid claim to Henry Colbert as “family.” Truth be told, I began to view all the residents of North Buxton as family. I felt at peace. I felt at home.

The museum offered a detailed history of North Buxton, but also of Blacks on the other side of the Canadian border. They didn’t leave and forget about us. They are us as we are them. A small exhibit told of Blacks who fought against America in the war of 1812 … Blacks fighting against America … Blacks fighting against slavery. This is the “forgotten history” not taught as a part the American school curriculum.

We roamed the two-room museum for about 30 minutes … just she and I. After, we walked back to the softball field and sat in the stands. We watched a few innings of the game before saying our goodbyes and heading back to the States. These weren’t star athletes by any stretch, but it was the best game my eyes had seen.

After all, it was being played on a field of dreams.