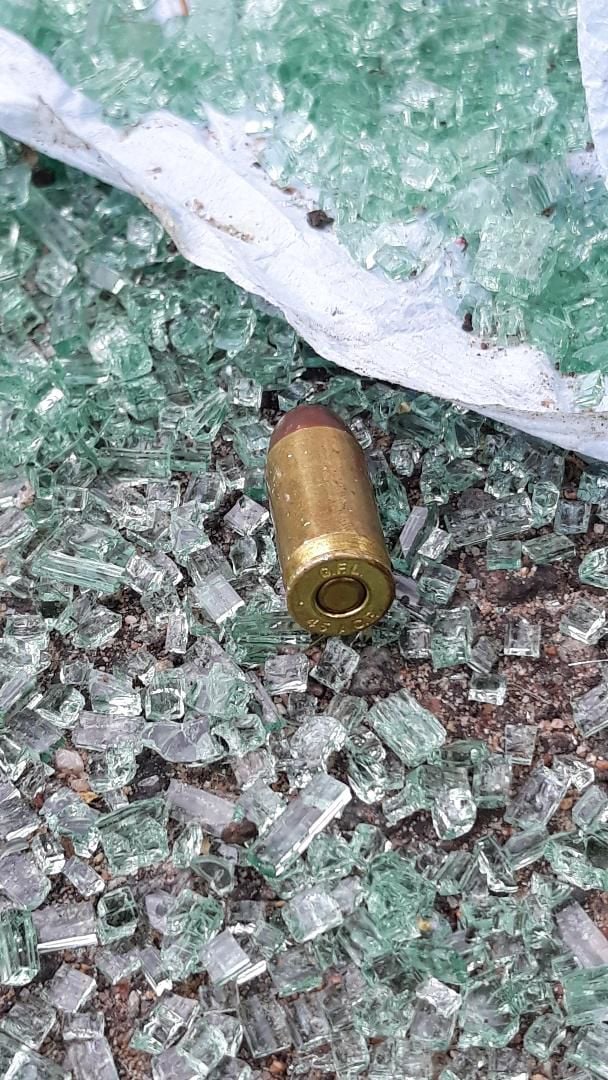 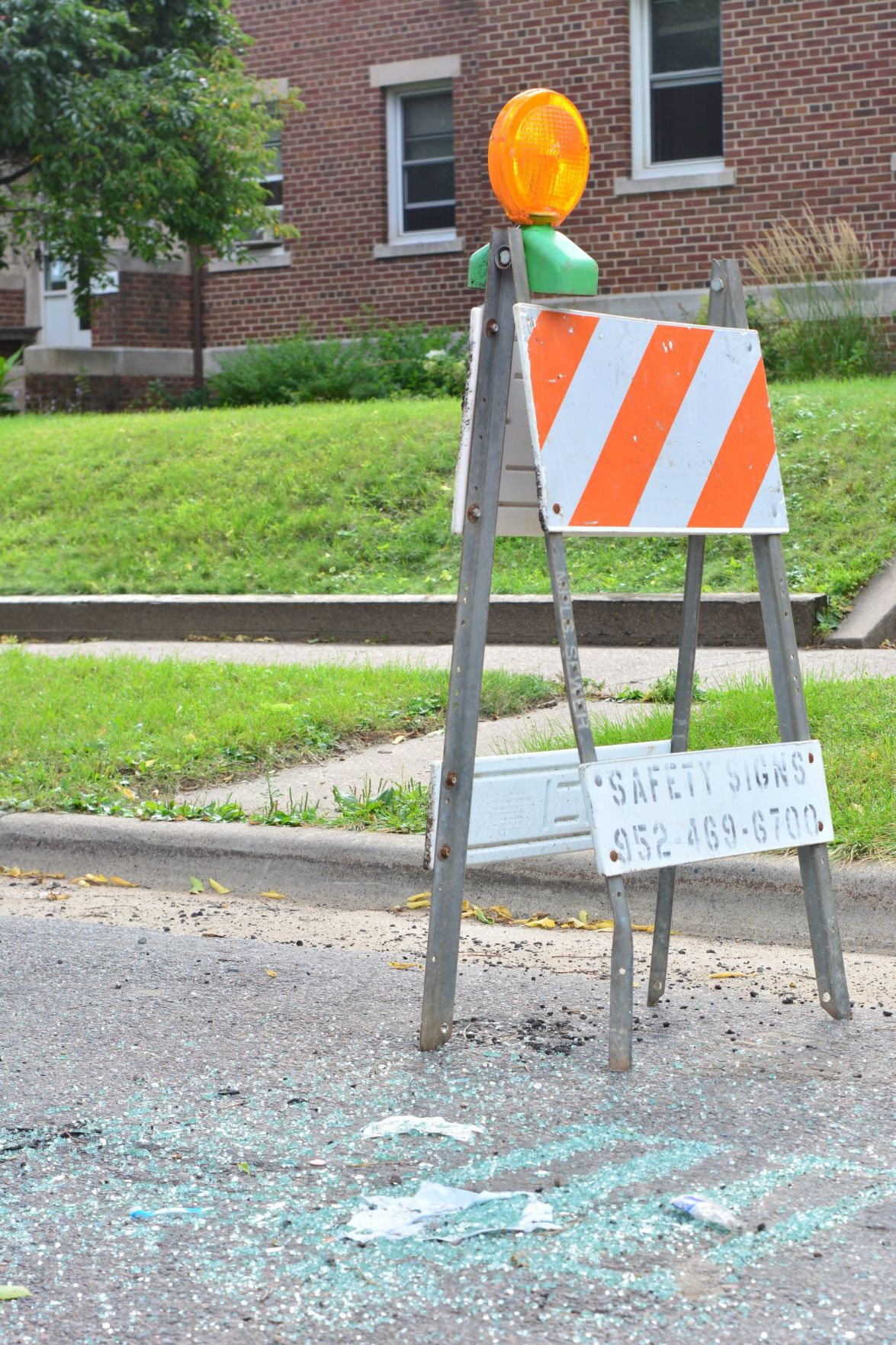 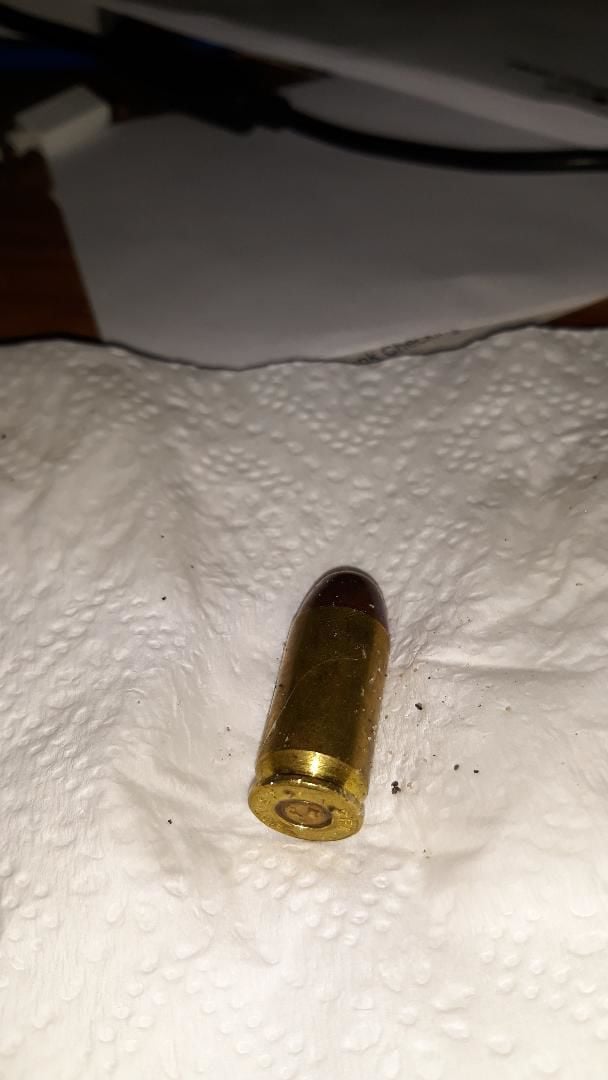 I sit at my desk staring at a bullet.

I can’t stop looking at it. I keep thinking of the almost infinite “what ifs” associated with the shiny .45 caliber cartridge. I look at the bullet and I stare intently, though the focus is blurred from the moisture that continues to accumulate and drip from my eyes. I’m almost in disbelief. There is a .45 caliber bullet sitting on my desk.

This bullet has a story, but I only know part of it. The part I know, I don’t like at all.

I guess at this point it’s a good idea to let you know how I’ve become intimately linked with this bullet.

Well, it’s not a magic bullet, so it didn’t just all of a sudden appear on my desk … I brought it here. I had to. It’s my civic duty as a decent human being.

You see, I had to bring the bullet to my desk because it was found on the street … in a pile of shattered glass just in front of our offices of Insight News on Bryant Avenue North in North Minneapolis. The bullet was found less than a half a block from two elementary schools and a block and a half from a middle school. I had to retrieve the bullet because it seems the Minneapolis police were unwilling … unbothered to remove it themselves. To them, it seems, it was no big deal.

I know this because when the bullet was brought to my attention, I immediately did the responsible thing and called the police. I made the call at approximately 11:47 a.m. on Aug. 26. I told dispatch that a live round was in the street in the middle of broken glass and we were not touching the bullet to try and maintain the integrity of the crime scene. Afterall, I myself, have reported on stories where bullets were found to have had both DNA and fingerprints on them. Dispatch asked for my name, phone number, address of the property and even which direction of the street it was on. I obliged by offering all the details of which she asked. She asked would I be at the location for another 30 minutes or so, and I said I would, and she said an officer would make contact with me shortly. This is important, so I’ll circle back to this in a bit.

The location of the bullet was next to recent construction, so I grabbed a leftover hazard sign – you know the ones with the big blinking yellow light … they’re quite visible (again, I’ll get back to this too) … and placed it over the shattered glass and live .45 caliber bullet, and I went inside awaiting a police call. That call never came.

At close to 4:40 p.m., still concerned about the bullet in the street, I looked outside to see the hazard sign undisturbed still sitting over the glass and the bullet. I was leaving for the day, but there was no way I was going to let the bullet stay behind … stay for some kid to pick up, show it off to his or her friends … do like many kids do … like I as a kid did … try to fire the bullet with a hammer and nail, vice grips or some other form of “zip gun,” which is what kids did in my neighborhood growing up. Heaven forbid some child pick up the bullet, take it to school to show off, get suspended, expelled and unjustly exposed to the criminal injustice system all because of a shiny “toy” found in the streets.

So, with a napkin, I picked up the bullet and took to Facebook to express my anguish to the public. A day later and here I am staring at this bullet, thankful that I’m the one looking at it instead of some emergency room doctor … or coroner.

I’m a journalist, so I do what comes natural … I question.

I called the Minneapolis Police Department spokesman, John Elder, to ask for official comment and to get the average response times for calls either by zip code or precinct. I’m in the troubled Fourth Precinct … home to the killers of unarmed Jamar Clark and home to the racist Christmas Tree in its lobby decorated with Newport cigarettes, Popeye’s cups, malt liquor cans and yellow crime scene tape. I also asked for a log of all officers on duty in the precinct and for a log of all calls between 11:40 a.m. Aug. 26 and 5 p.m. Aug. 26. I was told the request for information would have to be made as a data request, which I promptly requested online. But the “official comment” that I requested struck me as a bit odd.

“Our squad did respond when they were available to.

“The call came in at 11:56 (a.m.) and the squad arrived at 4:02 (p.m.). They tried to make contact and were unable to locate the property nor anyone at the address,” is what was sent as the official response.

Remember that part earlier I said I’d get back to? Well, I’m back to it.

But again, I didn’t pick up the bullet until after the supposed response. I say supposed because I didn’t leave the premises during said time, several others were also inside the premises, as I said earlier, I left the full address and my cell phone number as a contact. Somehow a trained officer couldn’t find a street address? Oh, and remember that whole hazard sign? He, she or they missed that too? Really? Hum. Um, OK.

I can also verify I did not receive any call at or around 4:02 p.m. on Aug. 26. Again, I’m a journalist, so I’m trained to be a bit of a skeptic. I asked Elder for at report from the supposed responding officer(s) and he replied, “No report was generated.”

I hate to sound like the Church Lady from “Saturday Night Live,” but, “Well, isn’t that convenient.”

I then sent a follow-up request for the audio from my call to dispatch. I just want to verify for myself that I provided the proper address and phone number. I’m awaiting response.

My trauma and anger stem from multiple sources.

The first source of trauma is knowing that something happened outside of my place of employment that left a bullet and shattered glass in its aftermath. In three years, I’ve experienced two shootings on the block and a block away I witnessed a man take his last breath after being shot … an image that will haunt me for eternity. I’m traumatized to the point that I hear hammering and I instinctively think gunshots.

My anger comes from the fact that police claim time and again they don’t have cooperation from the residents in North Minneapolis, yet when I … a concerned resident of North Minneapolis … do everything asked of me as a responsible citizen the response is … well, no response. Or, as they claim, a four hour and six minute late response.

And yet, here I sit staring at a bullet on my desk.

Live round found on street

They shoot our neighbors but they can't investigate a live round left in the middle of the street?