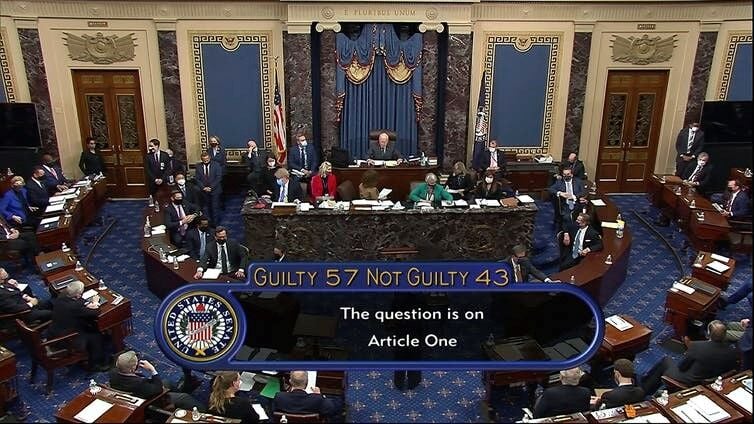 In this image from video, the final vote total of 57-43 meant an acquittal of former President Donald Trump of the impeachment charge because conviction requires a two-thirds majority vote. 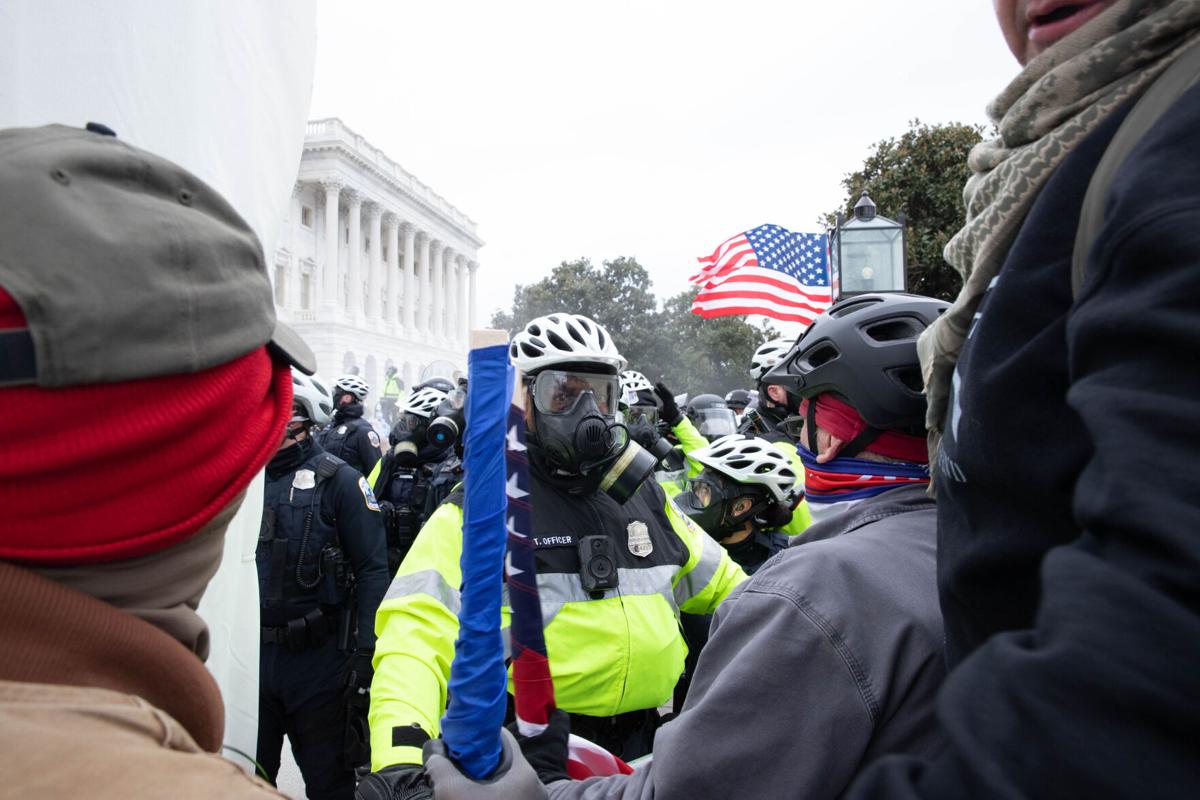 Police officers attempt to push back a pro-Trump mob trying to storm the U.S. Capitol following a rally with Trump on Jan. 6, 2021 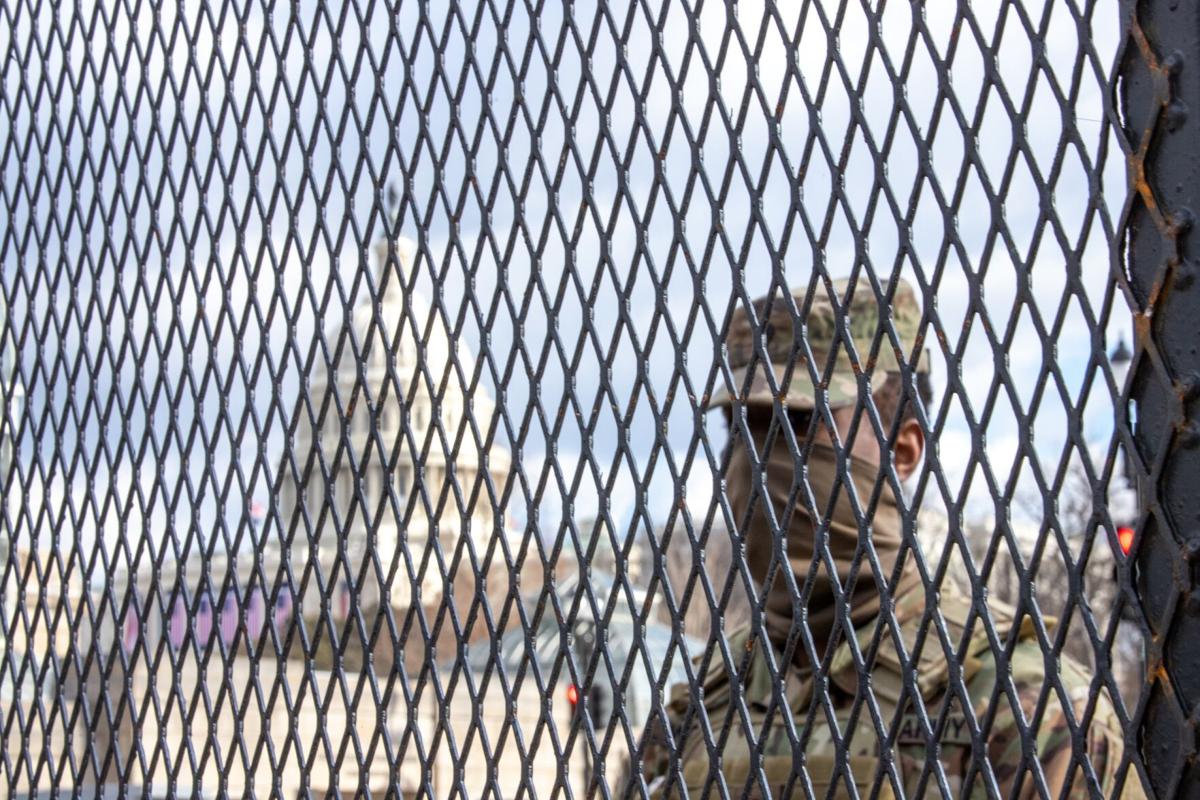 The impeachment trial shows American democracy is in bad shape.

The Senate’s decision to acquit former President Donald Trump in his second impeachment trial may have been a victory for Trump, but it is a clear sign that democracy in the U.S. is in poor health.

In a constitutional democracy, the majority’s authority to govern is limited by the rule of law and by a set of legal rules and principles set out in the Constitution.

Constitutional rot is a condition in which we appear to be formally governed by constitutional rules and the rule of law, but the reality is quite different. When rot sets in, public officials and the public routinely ignore or subvert those rules while sanctimoniously professing fidelity to them.

Appearance is not reality

Among the practices and principles of a constitutional democracy are limited government and the separation of powers, majority rule through elections that are fair and free, respect for minority and individual liberties, and government based on reason and deliberation. These were famously stated in Federalist #1, an essay by Alexander Hamilton that laid out:

It seems to have been reserved to the people of this country … to decide the important question, whether societies of men are really capable or not of establishing good government from reflection and choice, or whether they are forever destined to depend for their political constitutions on accident and force.

In my book, “Peopling the Constitution,” I asked citizens to “imagine an ugly picture: A citizenry unwilling to hold its representatives or itself accountable to basic, fundamental constitutional rules and values.” This could happen either because fidelity to them is outweighed by some other goal, such as security or holding on to power, or because of a base impulse such as fear.

Or perhaps the people fail to hold representatives or themselves accountable because they do not know what those principles and values are or why or even if they are at risk.

Election 2020 and its long aftermath, culminating in a second impeachment trial of Trump, is a clear and undeniable sign of just how rotten things are, constitutionally speaking.

Trump and many of his Republican supporters inflamed an insurrection and encouraged violence directed at a coequal branch of government – Congress – as it discharged one of its most basic constitutional responsibilities – determining the results of the presidential election.

What ended on Jan. 6, 2021, as an assault on the peoples’ representatives began months earlier as an attack on the electoral process.

Trump and his allies justified both as the work of true constitutional patriots intent on saving the republic from imaginary electoral fraud.

A constitutional democracy that cannot run elections that are free and fair, and which are acknowledged by winners and losers alike to be legitimate and conclusive, cannot call itself a democracy.

Election 2020, as assessed by professional and nonpartisan election officials, policy experts and academics, was one of the safest and most secure in American history. Consider a simple and overwhelming fact: Trump and his allies filed over 60 lawsuits trying to overturn the presidential election in federal courts and lost all but one.

In many of those cases, the judges involved – many of them Trump appointees – wrote opinions that spoke in unusually harsh language about the frivolity of the lawsuits.

And yet Trump and many of his Republican compatriots, rather than acknowledge defeat, determined instead to baselessly delegitimize the election.

But that was not even the most significant evidence of constitutional rot on Jan. 6. Building on a series of lies months – if not years – in the making, the nation’s president encouraged his supporters to march on Capitol Hill, with tragic, deadly results.

The constitutional customs and rules that govern elections require public officials and citizens alike to enforce and apply them. Otherwise they are sterile formalities.

This is why the Senate’s failure to convict Trump should be seen as a sure sign of just how deep our constitutional rot goes.

As the nation moves on, overcoming constitutional rot, I believe, requires public officials who have the courage to speak the truth and to defend the Constitution. That’s especially the case when the threat comes from one of its own. Trump’s acquittal in the Senate shows us just how uncommon public-minded officials are.

The country is fortunate that many judges, and some public officials, such as Georgia Secretary of State Brad Raffensperger, honored their oaths.

The Senate’s failure to convict Trump is a constitutional failure not just “in legal terms but in civic terms – a failure not primarily of political institutions but of civic attitudes,” as constitutional scholar George Thomas recently wrote.

Overcoming rot would also rely on a foundation of constitutionally literate citizens who insist upon respect for basic constitutional values.

There is no guarantee that responsible citizens will always effectively guard constitutional values, but the best remedy for rot is civic education. Citizens will not hold their representatives – or themselves – to constitutional principles they don’t know or don’t understand.

As Thomas Jefferson counseled, “If we think the people not enlightened enough to exercise their control with a wholesome discretion, the remedy is not to take it from them, but to inform their discretion by education.”

John E. Finn is Professor Emeritus in the Department of Government at Wesleyan University, where he taught courses in constitutional theory and public law, as well as in cuisine and popular culture. Finn is an internationally recognized expert on constitutional theory, the rule of law and political violence, and the First Amendment.

This article was originally published on The Conversation and republished under a Creative Commons license.